"If there's a single person in this country who needs this treatment and whose lives could be saved, and they can't get it because of Biden's playing politics. You know, how pathetic is that?" said DeSantis. 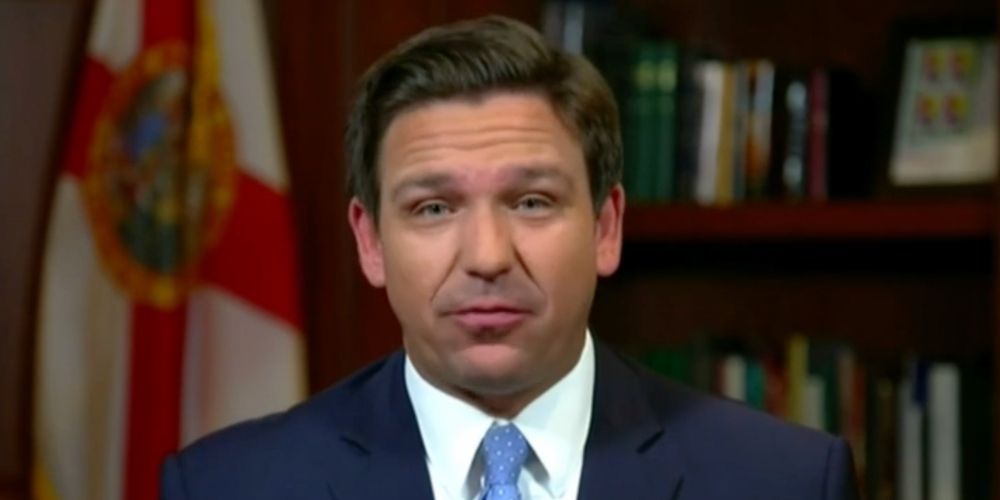 In an interview with Fox News host Sean Hannity on Wednesday Night, Florida Gov. Ron DeSantis slammed the Biden administration for withholding monoclonal antibody treatments from the state, telling Floridians that he will fight "come hell or high water" to get those treatments for his residents.

"First thing you did when COVID hit is you mobilized every state agency to protect the elderly population of your state; you did a great job. Then it became a hotspot with the Delta variant. We had what's called breakthrough cases. Fully vaccinated people, they were getting COVID. Okay, temperature usually plays a role," said Hannity.

"Now, it's interesting because three weeks ago, you get in the crap beat out of you. I've looked at the numbers, they've gone down dramatically. You built these monoclonal antibody centers all throughout the state. Now Joe Biden's rationing it, I understand they don't need to because we have plenty of it. And you have to now go out and buy it yourself. Is that right?" Hannity continued.

"Yes, Sean. We set up 25 different sites throughout the state, telling people that early treatment saves lives. What we were seeing is when we had the Delta surge, most of the people being admitted to the hospital not only didn't get monoclonal antibodies, they didn't even know about monoclonal antibodies," said DeSantis, who noted that Dr. Anthony Fauci didn't talk about the treatment during his countless appearances before the public.

"And so we helped raise the profile and also expand access. And the results are, the statewide hospital census for COVID patients has gone down 34 days in a row, our hospital admissions on a daily basis have gone down about 75 percent, this works. So this works," DeSantis continued.

DeSantis noted that when it became apparent that the treatment was working, the Biden administration took over control of the supply of Regeneron, one of the monoclonal antibody treatments, and cut Florida's supply.

"And so what we had to do, and the reason is they control all the Regeneron, they have a deal with them. So they dramatically cut our supply," said DeSantis. "So what we did, we did a deal with GlaxoSmithKline, who also has an effective monoclonal antibody called Sotrovimab. So we now have that in the state of Florida."

DeSantis promised Floridians that "I want to come hell or high water do what whatever I can to get it for you."

Hannity told DeSantis, "I've checked and what I've discovered is there's no shortage of Regeneron, or monoclonal antibodies in the country is there. So that would mean I mean, there's no reason to ration anything, right?"

"Well, they say there's not and if that's true, then you're right, Sean. It's just punitive against Florida, because he's so obsessed with attacking Florida. He does that rather than does his job," replied DeSantis.

DeSantis noted that the Biden administration may be trying to conserve the treatment's doses across the US because of the upcoming winter and the possibility for the Delta variant to hit the northern states.

"So I think they're doing that because they see what's on the horizon," said DeSantis. "But at the end of the day, if there's a single person in this country who needs this treatment and whose lives could be saved, and they can't get it because of Biden's playing politics. You know, how pathetic is that? That is not leadership."

Last week, DeSantis announced that he had acquired 3,000 doses of Sotrovimab from GSK.

"It got emergency use approval just a few months ago. The clinical data that they had was really, really strong. In fact, that was even stronger than Regeneron," said DeSantis in a press conference. "And we know Regeneron has been very, very effective and in the real world."

"So we're going to be able to use that Sotrovimab to bridge some of the gaps that are going to be developing as a result of the Biden administration cutting — dramatically cutting medications to the state of Florida," DeSantis continued.