"We just saw a grown male kinkster who has influence in the Oval Office... that's what we saw," Emmons said to Bannon. "This is a man who, previous to this, was interviewing animals on TikTok and got hardly any views, went trans and made his career." 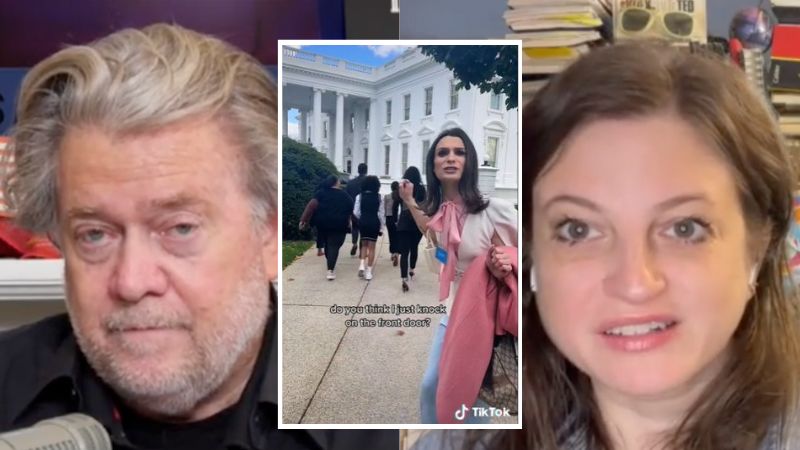 The Post Millennial's editor-in-chief, Libby Emmons, joined Steve Bannon's War Room on Saturday to discuss the meeting between a male TikTok "kinkster" who identifies as a woman, Dylan Mulvaney, and President Joe Biden.

Biden met with the transgender activist at the White House Thursday for an interview with Now This News, which will air Sunday. Mulvaney, 25, who in recent years went from identifying as a gay man, to non-binary, to a woman, has become TikTok-famous for documenting his transition to "girlhood."

"We just saw a grown male kinkster who has influence in the Oval Office... that's what we saw," Emmons said to Bannon. "This is a man who, previous to this, was interviewing animals on TikTok and got hardly any views, went trans and made his career."

The girlhood series includes Mulvaney partaking in activities such as referring to women's vaginas as "Barbie pouches" and discovering feminine hygiene products.

"He posted a video every day… one was about being a bimbo. One was about the bulge in his shorts… he called women's genitals… I think 'Barbie pouches' is what he said. He gets a canopy bed; it's all very exciting to be a girl—and you're in your mid 20s."

"He gets all kinds of awards now. He gets special access to the president," she added, lambasting the fact that the "press can't get questions asked."

Bannon then emphasized that the President's time is "precious," especially with "with all these crises going on."

"How can they spend time doing this?," he asked.

According to Emmons, this is all part of a plan to "demoralize" the American people.

"It's a pretty shocking thing to see that this is what's going on. I do think that a lot of this is about demoralizing us. I think a lot of it is about destroying the American family," she said. "Once the family is destroyed, and the government is our partner in life and our parent and our lover and whatever else, they can do what they please with us."

"We won't have anybody to trust or rely on. We won't have any independent units to be part of, or community. The government just wants to control all of that. We've seen it in their advertising for years, with Obama, and now we see this going on where the government says that children aren't yours. They are actually everybody's, and it's important to make sure that they can be fully indoctrinated into gender identity ideology and critical race theory."

Bannon then played clips from Mulvaney's TikTok page, showing the influencer appearing to act like a little girl while discovering new aspects of "girlhood."

"I would not be surprised if [Biden] was watching this 'Hundred Days of Girlhood' TikTok series because each clip is barely a minute long, and that's about as much attention span as the president currently has," Emmons said.

According to Emmons, Mulvaney contributes to the socially contagious nature of identifying as transgender, as more children are claiming to be trans than ever before. Recent data shows that Maryland's largest school district has seen a nearly 600 percent increase in transgender students within the last two years.

"Kids wanna be trans because it gets them popularity; it gets you clicks on TikTok," she said.