WATCH: Media pundits praised New York Governor Cuomo unquestioningly for a year before scandals caught up with him

Tucker Carlson saved up masses of clips of media fawning and praising New York Governor Andrew Cuomo over the past year, and played them for viewers on Monday night. 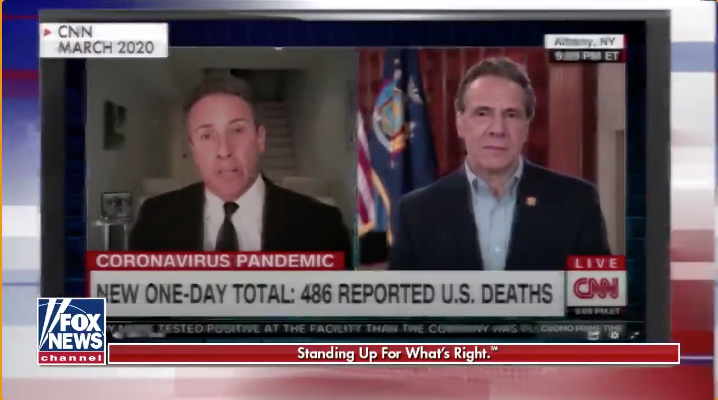 Tucker Carlson saved up masses of clips of media fawning and praising New York Governor Andrew Cuomo over the past year, and played them for viewers on Monday night.

Reveling in the media's transparent sycophancy, Carlson said that the media "ignored" the stories about nursing home deaths and disastrous policies of the Cuomo administration, instead "slobbering" all over him.

He showed clips from ABC talking about how Cuomo was "commended," and his over 80 percent approval rating, where Cuomo simply accepts the praise. CBS, pundits on Good Morning America, Steven Colbert, all issued praise to Cuomo, asked him softball questions about his greatness, and watched as Cuomo accepted the accolades unflinchingly.

This was at the same period in time when those who issued criticisms of Cuomo, such as New York State Assemblyman Ron Kim of Queens, Janice Dean who lost both of her in-laws in nursing homes due, she believes, to Cuomo's policies, were virtually ignored by mainstream media.

Cuomo went on to win and International Emmy Award for his pandemic press conferences, where his folksy wisdom, family stories, and armchair philosophizing brought psychic relief to New Yorkers, while his policies harmed the state and her populace.

Cuomo was called on by his brother, CNN anchor Chris Cuomo, to run for president, while the two men were commended for their desirability. He was praised by Joe Biden for his "real leadership," as well, and by CNN's Brian Stelter for providing "hope, but not false hope."

Now, things are different, and he's being called on by these same pundits to resign over allegations of sexual misconduct from five women, four of whom accused Cuomo of workplace sexual harassment.

It is not Cuomo's failed policies in nursing homes, which New York State Attorney General Letitia James' office found led to the undercounting of deaths in those facilities of up to 50 percent, but allegations of sexual misconduct that are likely to pull the much-praised governor from his perch.

Cuomo has said unequivocally that he will not resign.