One man is dead and his girlfriend injured after an assailant pulled them from their car and shot both of them at point blank range during the Puerto Rican People's Day Parade in Chicago. 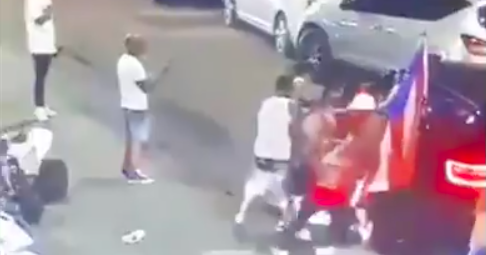 One man is dead and his girlfriend injured after an assailant pulled them from their car and shot both of them at point blank range during the Puerto Rican People's Day Parade in Chicago.

In the short, graphic video, a large group of men can be seen surrounding the drivers side of an SUV. The video shows a group of men pulling Arzuaga out of the car before one man shoots him in the back of the head as he shields the mother of his children, Perez.

A young man in a white tank top and grey shorts can be seen firing three shots at point blank range at Gyovanni Arzuaga, 24 and Yasmin Perez. The couple had their child with them, as well. The child was taken to a local hospital, but was not reportedly injured.

Arzuaga was taken to AMITA Health Saints Mary and Elizabeth Medical Center where he was pronounced dead. Perez, who was directly underneath Arzuaga at the time of the shooting was also shot in the neck and remains in critical condition, according to CBS Chicago.

This intersection has seen a rush of shootings in recent weeks. At 12:56 am Sunday, a 28-year-old woman was shot in the head after a minor traffic accident on North Kedzie Avenue. The woman was taken to Stroger Hospital of Cook County in critical condition. A 33-year-old man walking nearby was shot in the back in the cross fire and was taken to Mount Sinai Hospital in fair condition. Both victims continue to fight for their lives in hospital.

Another shooting early Sunday morning saw a woman get shot in the hand and was taken to hospital in good condition. There is no one in custody for any of these shootings and no word on the progress of the investigation.