$1000 dollars out of Johnson's own pocket for a forced vacation mandated by his majesty the Prime Minister of Canada. 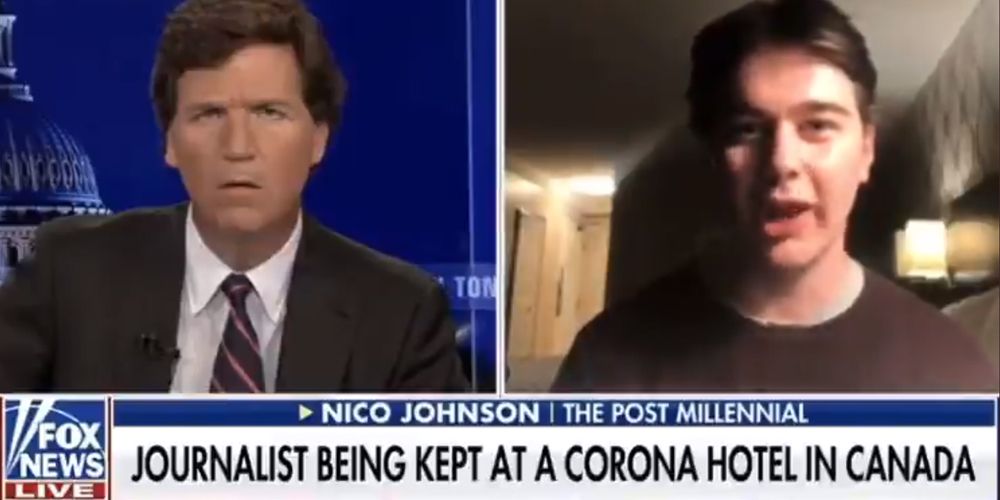 Nico Johnson of our very own The Post Millennial was detained and sent to a quarantine facility upon landing in Canada. This being the new part and parcel policy set forth by PM Justin Trudeau for dealing with the pandemic, officially as of last month.

Tonight Carlson interviewed Johnson from his room in what the Fox News host calls an internment camp.

Located right off of Toronto Pearson International Airport is where our outlet’s political editor currently resides. Johnson says while it isn’t “squalor” he doesn’t understand why he has been involuntarily charged $1000 for three nights in this COVID hotel building. Carlson asked if he tested positive for COVID. Thankfully Nico tested negative (a requirement for getting on the plane).

“And then I went to the border security. I said that I’m a journalist, I’m here to cover the Trudeau government, and parliament [...] and in spite of all that I was shipped off to one of these hotels. I’m not allowed to leave… if I leave I can get quite a serious punishment. And it’s not terribly pleasant really. I’d rather like to go home, which I think would probably be safer.”

Johnson went on to agree with the points made by Carlson earlier in his monologue. That PM Trudeau has totally butchered his pandemic response and this forced quarantine measure just comes off as if the leader of Canada wants to appear like he’s doing something sufficient enough on the world stage.