"President Biden has committed in both words and actions to fight for all Americans and will not hesitate to hold the state accountable," she concluded. 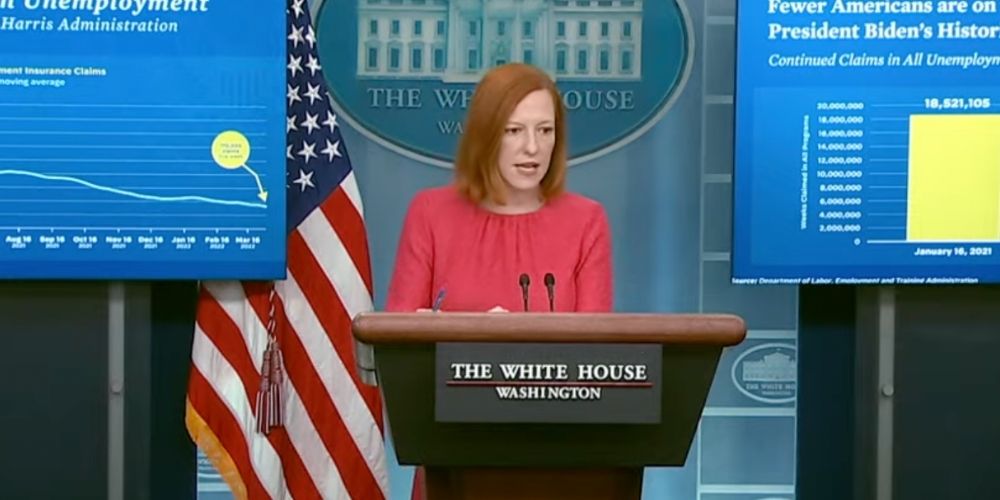 During Thursday’s White House press conference, Press Secretary Jen Psaki said that Alabama lawmakers have been "put on notice" by Biden administration for a law being considered that would ban gender reassignment surgeries on minors.

"Republican lawmakers are currently debating legislation that among many things would target trans use with tactics that threatens to put pediatricians in prison if they provide medically necessary life saving health care for the kids they serve," she said.

She continued on to say that like the "extreme government overreach" seen in Texas, where Governor Greg Abbott gave orders for the Department of Family and Protective Services to  investigate families who have children that are transitioning, "today's vote in Alabama will only serve to harm kids."

"But Alabama's lawmakers and other legislators who are contemplating these discriminatory bills have been put on notice by the Department of Justice and the Department of Health and Human Services that laws and policies preventing care that healthcare professionals recommend for transgender minors may violate the constitution and federal law," said Psaki.

She added that "every major medical association agrees that gender affirming health care for transgender kids is a best practice and potentially life saving."

"All of this begs an important question, what are these policies actually trying to solve for? LGBTQI+ people can't be erased or forced back into any closets, and kids across our nation should be allowed to be who they are without the threat that their parents or their doctor could be imprisoned simply for helping them and loving them," Psaki said.

"President Biden has committed in both words and actions to fight for all Americans and will not hesitate to hold the state accountable," she concluded.

On Thursday, the Alabama Senate passed a bill that would ban "instruction" on sexuality and gender for children in kindergarten through fifth grade, mirroring Florida’s recently enacted "Parental Rights in Education" legislation.

The bill also requires students to use bathrooms and locker rooms that match the sex listed on their original birth certificate, according to AL.com.

The bill heads back to the House, where members will have to vote on the amendments.

Alabama lawmakers advanced legislation on Wednesday that would prohibit doctors from giving minors puberty blockers, hormones, or performing surgeries as it relates to gender reassignment.

According to NBC News, the House Judiciary Committee approved the Senate-passed legislation, and the bill now moves to the full Alabama House of Representatives. The committee also approved a House version of the bill, which has been passed and heads to Governor Kay Ivey's desk for her approval.

"The bills would make it a felony, punishable by up to 10 years in prison, for a doctor to prescribe puberty blockers or hormones or perform surgery to aid in the gender transition of people 18 years old or younger," NBC News reported.

"Adults are free to do what they want to do, but this is to protect children," said Rep. Wes Allen, the Republican sponsor of the bill.

The bills in Alabama mirror similar ones passed recently in states across the country.

One of those states, Arizona, was condemned by Psaki last week, who said "Today, four extreme and harmful bills were signed into law in Oklahoma and Arizona, three targeting transgender youth (2 AZ, 1 OK) and one reproductive health care (AZ). These laws are unacceptable and we won’t stop fighting for justice and equality."