Paul was reportedly on the way back to his hotel with his spouse, just one block away from the White House. Police flanked him to keep the agitated, laughing, screaming activists back. 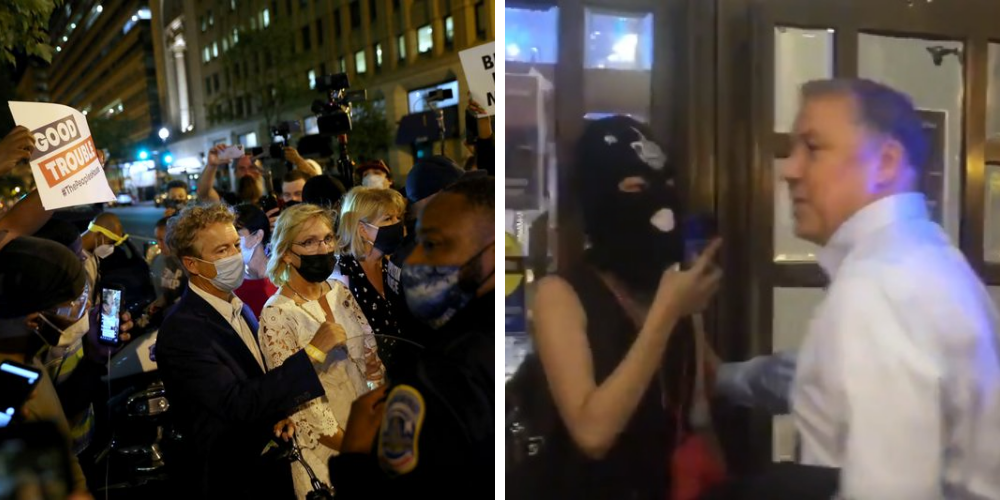 Republican National Convention attendees, including Kentucky Senator Rand Paul and Republican National Committeeman Chris Ager, along their wives, were nearly assaulted by a raging mob of over one hundred Black Lives Matter protestors on the final night of the convention.

Paul was reportedly on the way back to his hotel with his spouse, just one block away from the White House. Police flanked him to keep the agitated, laughing, screaming activists back. One activist can be heard screaming "her name is Breonna Taylor" over and over.

"Just got attacked by an angry mob of over 100, one block away from the White House," the Republican senator tweeted a few hours after dusk. "Thank you to @DCPoliceDept for literally saving our lives from a crazed mob."

The crowd swarmed Paul, pushing against him as local law enforcement order them to stay back.

"Say her name!" was chanted at the masked senator clutching his wife for dear life.
Then one assailant lunged at Paul, knocking into a nearby police officer who used his bike as a barricade. Both were knocked to their feet.

"You a p*ssy a** n***a!" could be heard over the attack. The couple was rushed out, protected on all sides by Washington, DC area police.

A video streamed live captured a US Senator under siege by the mob in Washington, DC. This was reported to be one block from the White House.

OANN's Jack Posobiec reported that Paul stated he does not believe he would have made it out without police protection.

The Daily Caller's Phillip Nieto captured footage of RNC committeeman Chris Ager and his wife as they were were berated by a balaclava-wearing, white, female protestor who threatened to "f**k [them] up" as they attempted to enter the locked doors of their hotel.

The woman then asked, repeatedly: "How do you feel about the deaths of black people in America?"Eventually the couple made their way into the parking garage.

Ground footage from the streets surrounding Pennsylvania Avenue showed one white-haired man punched in the back of his head and later tackled to the ground by BLM activists who threw water over him.

Journalist Dan Bongino reported that he has footage of demonstrators screaming and cursing at him and his wife, Paula, and threatening to rape her and assault him. He addressed the media directly, stating that they have been directly lying to the American public about the protests being "mostly peaceful."

He later shared the video, and more will be forthcoming on his show.

As convention attendees left the ground of the White House, they were verbally assaulted and cursed at by demonstrators who had gathered for the purpose of disrupting the president's nomination acceptance speech.

Katie Pavlich, of Fox News and Townhall, noted that this was not the behaviour of conservatives at the DNC's virtual convention last week.

Posobiec wondered if Democrat presidential nominee Joe Biden would denounce the mob of demonstrators that were launching the attack on a sitting Senator of the United States.

Richard Grenell called for Joe Biden to condemn the violence and try to control his supporters who are "creating chaos" out in the streets.

The activists, agitators, rioters, demonstrators and protestors took up their cause outside the convention, which was held outdoors at the White House. Prior to their accosting convention attendees, they gathered before the historic St. John's church. They stated that they would burn it down if demands weren't met.

They likewise stated they would burn things down in the name of justice as they marched through the streets. These were the same streets that Washington, DC, Mayor Murial Bowser authorized to be painted with a large, Black Lives Matter street mural.

Earlier in the day, protestors had brought a guillotine to the White House where the executed an effigy of the president.

Chad Felix Greene noted that the media messaging about the danger of Donald Trump seems to apply to leftist demonstrators, primarily.

With both the Democrat and Republican presidential conventions over, there are 67 days until the election is held. Just as the election itself is in contention, the method by which people should vote is also being hotly debated.

Democrats claim that it's too unsafe to vote in person, due to the ongoing health crisis and despite the masses of leftist protestors who gather nightly in cities across America, while Republicans claim that changing the method of voting wholesale with barely three months until election day is irresponsible.