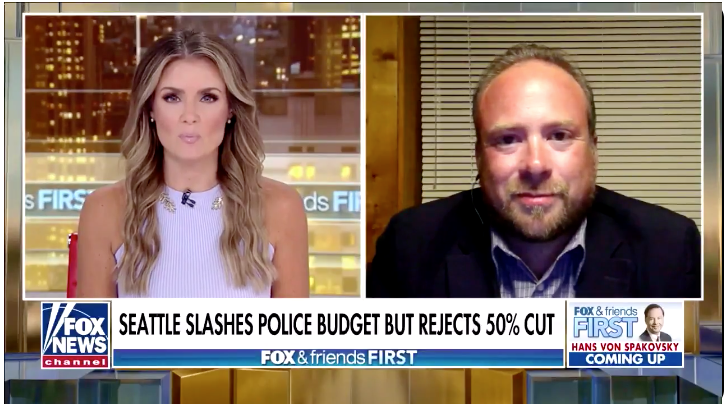 The Post Millennial's Seattle correspondent Ari Hoffman appeared on FOX & Friends First to discuss recent proposals voted on by the Seattle City Council. The decisions had Hoffman asking "do they intend anybody to work for the police department ever again?"

On Wednesday, the council approved a number of budget amendments related to the 2020 funding of the police department and struck down some extreme defunding measures. Hoffman says that these proposed cuts will "make Seattle less safe."

These cuts include a salary reduction for 13 police executives who make $200K to $300k a year. The executive's new salaries will be cut to the lowest rung in each of their respective positions. Other cuts agreed upon were $800k from the recruitment and retention budget, $50k from travel and $36k from implicit bias training.

The council also voted to slash salary and overtime caps and cut the police's homelessness outreach NAV team. Under these plans up, to 100 officers would see their positions eliminated.

Some of the even more extreme proposals failed to garner a majority of votes. Council member Kshama Sawant put forward a motion that activists, community groups, and protestors have been supporting for weeks.

Sawant's plan called for a 50 percent (or $85 million dollar) budget cut to the police’s remaining 2020 fund. Despite the failed votes in favour of 50 percent cuts for the rest of this year, it seems the majority of the council supports implementing deeper cuts for 2021.