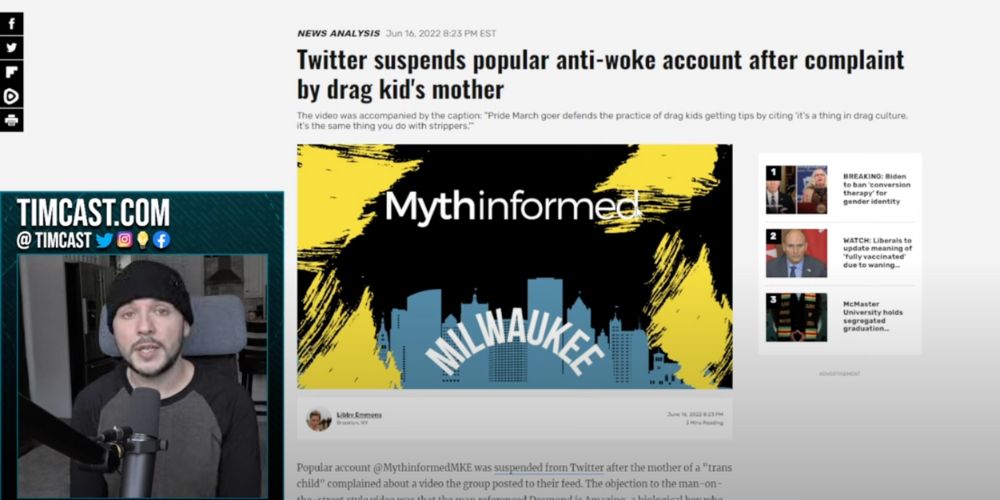 On Thursday's Timcast IRL, Tim Pool broke down the latest case of Twitter's authoritarian overreach of  suppressing speech, the suspending the account of MythinformedMKE. He used it to show why Elon Musk’s takeover of the social media giant is important.

Pool read out The Post Millennial’s reporting on Twitter suspending the popular anti-woke account after a complaint by Desmond the Amazing's mother, which details the series of events that resulted in the suspension for a DMCA, or copyright strike.

He delved into the meat of MythinformedMKE's offending post, which featured Pride attendee speaking about having kids at drag shows, giving money to the dancing men in skimpy costumes.

"It’s a thing in drag culture," the Pride marcher said, defending the practice. "It’s the same thing you do with strippers."

"That’s the problem," Pool said, before asking incredulously: "Is that what you’re defending?"

"We don’t want kids going to strip shows," he said.

Pool said that Desmond is Amazing, the young boy whose mother demanded the content be scrubbed, was not performing drag, but was rather stripping for the crowd.

"He wasn’t just performing drag, he was stripping," said Pool. "I’m gonna say that again. Desmond is Amazing, a little boy, was stripping on stage. He was on stage, a bunch of men were waving money, and he was pulling off his clothing."

"That’s called stripping," Pool said in a whisper, joking about the frequent Joe Biden move of whispering to make a point.

The video that MythinformedMKE was struck down for included a three second picture of an article about Desmond, which the mother claimed was copyrighted under Twitter policies.

The Post Millennial previously reported: "In recent Twitter policy, a new guideline was revealed in which a person has ownership of their image, regardless of copyright, and can request that an image be removed."

"Really?" Pool said. "So you mean I can go to anyone who ever criticizes me and to have that video removed on copyright grounds?"

"Well, well, well, what a terrifyingly stupid policy. Absolutely stupid, but you know, I suppose that will only result in more hyperpolarization."

After reading through how the mother said that the photos used in the video were copyrighted content and not to be used for public domain or commercial use, Pool recalled how something similar happened at Timcast.

"We've had something similar happen to us over here at Timcast, one of my videos was flagged. I don't know if it was exactly Desmond, I think it may have been, it's been a while. But we won, it didn't fly."

"The policy to remove people is not a legal standard. It is Twitter’s standards to get rid of ideology they do not like."

"What works: When big corporations come out and say we support pride, and then regular people are like sounds good to me, big parade.

"Then you show them videos of pride and you see 45-year-old morbidly obese men walking around naked and shaking their butts of people. That's an exaggeration mind you, but you do have morbidly obese older men, that's true. You can see those videos."

"But there's also a video from a Pride parade where a man in a thong walks up to a cop, gets very close to his personal space, and starts twerking and shaking himself at him and laughing. I mean, that's that's just wrong. Don't do that. Don't get in people's faces and do these things," said Pool.