WATCH: Tucker Carlson breaks down how the FBI is planning crimes to then prosecute

"The FBI had a hand in nearly every aspect of the alleged plot, starting with its inception." 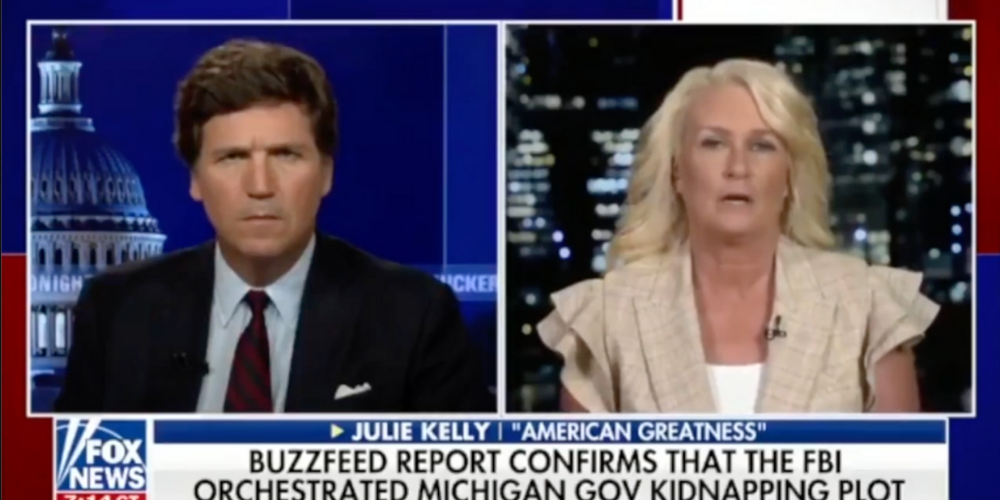 A report first published by BuzzFeed alleges that the FBI was involved in Michigan Governor Gretchen Whitmer's kidnapping plot.

Tucker Carlson brought up the report during his show, and invited Julie Kelly from American Greatness to discuss the findings.

"We're learning much more about the FBI's involvement in another alleged act of domestic terrorism. That would be the plot last year to kidnap the governor of Michigan, Gretchen Whitmer," said Carlson.

"The FBI had a hand in nearly every aspect of the alleged plot, starting with its inception," he adds. "In the end, it looks like there were more FBI snitches, informants, people working with the FBI involved in the plot then weren't. It was an FBI plot"

Tucker's guest, Julie Kelly stated that "what was interesting in the BuzzFeed article, aside from how they put the kidnapping plot together, was a protest at the Capitol building in Lansing, Michigan, in April of 2020, which eerily mirrors, what happened on January 6."

"This includes these militia groups, one of them, the three percenters who also have been accused of participating in January 6th."

Kellie says that police in Michigan stood down to the armed protestors, who then entered the Michigan State Capitol in Lansing, MI, in search of Governor Whitmer.

"They had firearms, photographers were there to take pictures. They were banging down doors, looking for Gretchen Whitmer, and all of those photographs and everything went viral, sounds really familiar about what happened on January 6th."

Kelly added that there is no reason to doubt that the FBI, who she says is highly partisan and has gone after Donald Trump and his associates, didn't play an "instrumental role" in infiltrating many of the groups that stormed the capitol on January 6th.

Tucker Carlson finished off the segment by stating that if he "heard another elected Republican say there was inadequate security on January 6th because Democrats are against law enforcement. When, of course, Democrats are completely for law enforcement, if they control it, and it protects them," then he is "going to scream".

Most Democrats blamed Donald Trump for the attempting kidnapping of Governor Gretchen Whitmer and for the January 6th riot at the US Capitol.