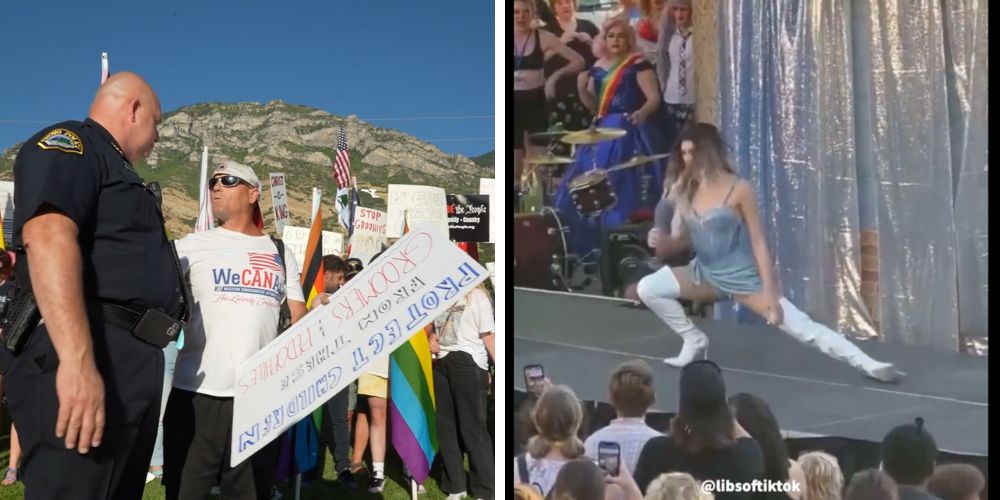 A "Back to School Pride Night" in Provo, Utah featured a "family-friendly" drag show at Kiwanis Park next to Brigham Young University. The school does not permit Pride clubs on campus, so the group stages activities off campus.

The RaYnbow Collective, a nonprofit that supports the BYU LGBTQ community, holds the annual event at a park at the beginning of every school year, according to the Salt Lake Tribune. Supporters of the event included members of the Black Menaces.

Drag queens performed on stage in front of families and supporters in sequins, feathers, high heels, and fringe. One with the stage name Jaliah Jambalaya lip-synced to Beyoncé's "Single Ladies."

"This shouldn’t be at a public park," said BYU senior and the co-founder of BYU Conservatives Thomas Stevenson. He referred to the drag show as a "social contagion with gender dysphoria."

Protesting BYU students wore blue BYU T-shirts and baseball hats and said they were concerned about the stage names of the drag performers, including "Jenna Tailia."

Members of the RaYnbow Collective countered the protest by wearing costumes made of white sheets and PVC piping to resemble angels' wings. This costuming came to popularity as part of the protests to bring attention to the killing of Matthew Shepard, a gay University of Wyoming student, during his killers' trial in 1999. It was recently revealed that Shepard was killed over crystal meth, and not his sexual orientation.

In 2020, BYU quietly updated the school’s Honor Code and removed a section banning "all forms of physical intimacy that give expression to homosexual feelings." University leaders clarified several weeks later that same-sex relationships were still "not compatible" with the rules at BYU.

BYU is operated by The Church of Jesus Christ of Latter-day Saints which forbids same-sex romantic partnerships.