"Since the beginning of the administration in our battle against Covid-19, it has been crucial for the American people to have access to factual, accurate, science-based information..." Jean-Pierre said. 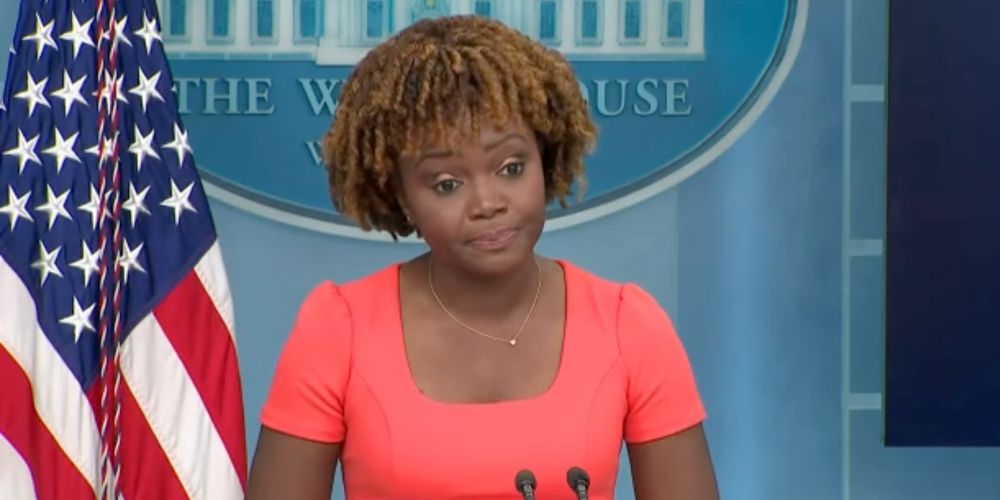 "A federal judge ordered that you have 20 days to turn over emails communicating with social media companies over misinformation and disinformation. What are those emails going to show?" a reporter asked.

"So I can’t comment — you asked me this question last week. I can’t comment on any specifically ongoing litigation. And so again, I’d refer you, would refer you to the Department of Justice," Jean-Pierre responded.

"A couple of things that I would say, just as a general matter on this, as we said over and over again: since the beginning of the administration in our battle against Covid-19, it has been crucial for the American people to have access to factual, accurate, science-based information and ensuring that any media platforms have access to the latest information on a once-in-a-generation pandemic, is something that has been done since the earliest days of the pandemic beginning under the former president," she continued, noting once again for the reporter to contact the Justice Department.

"What about if those communications are still happening? Are there frequent contacts between the administration and social media companies?" He pressed.

"So, I'll say this, you know, as we have said before, there has been ongoing work dating to the Trump administration to provide accurate Covid information where folks get their news. Again, this is litigation that is ongoing and is currently happening, clearly that's why it's ongoing, and so I would defer to Department of Justice on that," Jean-Pierre responded.

On Tuesday, Judge Terry Doughty ruled that the Biden administration has 21 days to turn over all email communications sent by Jean-Pierre and White House Chief Medical Advisor Dr. Anthony Fauci to social media platforms, according to Fox News.

The judge’s decision came in response to a lawsuit filed in May by Missouri Attorney General Eric Schmitt and Louisiana Attorney General Jeff Landry, which accused the Biden administration of suppressing free speech on topics like elections, Covid-related lockdowns, and the Covid-19 lab leak theory.

While the White House argued that the communications fell under executive privilege and presidential communications privilege, Doughty said, "This Court believes Plaintiffs are entitled to external communications by Jean-Pierre and Dr. Fauci in their capacities as White House Press Secretary and Chief Medical Advisor to the President to third-party social media platforms."

At the beginning of the month, it was revealed that "A recurring meeting usually entitled USG – Industry meeting, which has generally had a monthly cadence, and is between government agencies and private industry. Government participants have included CISA’s Election Security and Resilience team, DHS’s Office of Intelligence and Analysis, the FBI’s foreign influence task force, the Justice Department’s national security division, and the Office of the Director of National Intelligence. Industry participants have included Google, Facebook, Twitter, Reddit, Microsoft, Verizon Media, Pinterest, LinkedIn and the Wikimedia Foundation. The topics discussed include, but are not limited to: information sharing around elections risk, briefs from industry, threat updates, and highlights and upcoming watch outs."

The company had also been in contact with someone at the State Department, and gave details on the efforts Facebook had taken to "control information and misinformation related to Corona virus."