"But just broadly to the allegation that they're making, that somehow the US is responsible —," the reporter prodded, to which Jean-Pierre responded, "No." 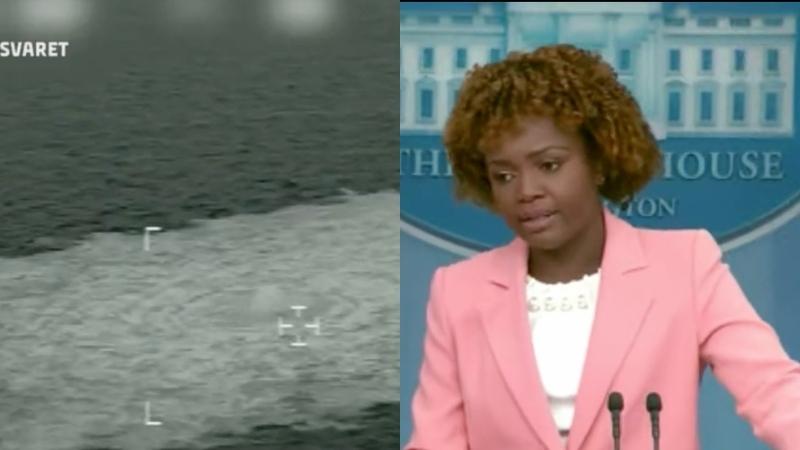 Responding to a reporter who asked about Russia's claims that the Us was behind the leaks, Jean-Pierre said, "so, look, the President said that NS 2 wouldn't become operational and we would work with Germany on that," she said. "And he was right, because Germany took the step in February to freeze it, which was widely reported by all of you. And so that is what the President was talking about at that time."

"But just broadly to the allegation that they're making, that somehow the US is responsible —," the reporter prodded.

In January, Biden-appointed Under Secretary of State for Political Affairs Victoria Nuland announced "If Russia invades Ukraine, one way or another, Nord Stream 2 will not move forward."

Then, during a February joint press conference with German Chancellor Olaf Scholz, President Biden claimed "If Russia invades… then there will be no longer a Nord Stream 2. We will bring an end to it."

"But how will you do that, exactly, since… the project is in Germany's control?" a reporter asked.

"I promise you, we will be able to do that," the president responded.

On Tuesday, Swedish and Danish authorities reported three leaks in the pipelines, which run under the Baltic Sea delivering gas from Russia to Germany. Two leaks were reported in Nord Stream 1, and another in Nord Stream 2.

Danish prime minister Mette Frederiksen noted that while "it is too early to conclude" whether the incidents were acts of sabotage, "there are three leaks and therefore it is difficult to imagine that it could be accidental."

German officials echoed Frederiksen's statements, adding that Russian involvement "could not be excluded" as a possibility.

Polish prime minister Mateusz Morawiecki said "We don’t know all the details of what happened, but we see clearly that it’s an act of sabotage related to the next step of escalation of the situation in Ukraine."

Following a discussion with Frederiksen, European Commission President Ursula von der Leyen put out a statement on Twitter decrying the act of "sabotage."

Due to the previous threats on Nord Stream 2 from the Biden Administration, some think that the US is responsible.

"Thank you, USA," tweeted Polish politician Radek Sikorski, who is chairman of the European Parliament's delegation for relations with the U.S.

First Deputy Permanent Representative of Russia to the United Nations, Dmitriy Polyanskiy, thanked Sikorski for "making it crystal clear who stands behind this terrorist-targeting of civilian infrastructure!"