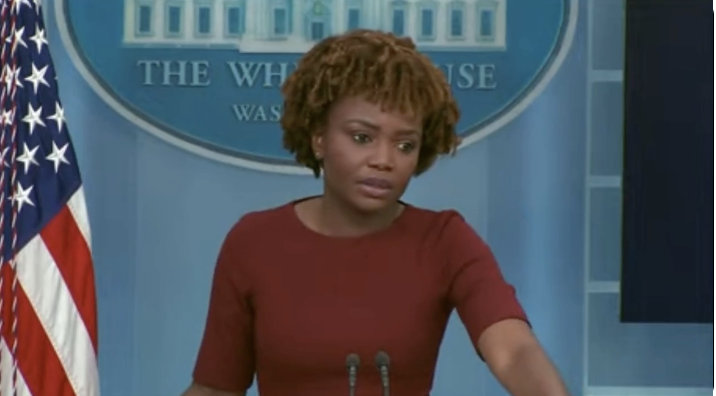 Karine Jean-Pierre spoke this afternoon regarding Joe Biden’s anticipated signing of an executive order which would ban so-called "conversion therapy" for those suffering from gender dysphoria, along with a plethora of "pro LGBTQIA+" initiatives to be implemented under the Department of Health and Human Services.

"The President will sign an executive order advancing equality for LGBTQIA+ individuals which includes historic steps to support LGBTQIA+ families and children," said Jean-Pierre, who the Biden administration counts among their diversity hires as a black, immigrant lesbian.

"These are historic actions that build on the progress we have made advancing the equality of LGBTQIA+ Americans and people around the world, but the federal government can and must do more," she said.

A reporter asked Jean-Pierre about these "global efforts" as regards the Biden administration's relationship to Saudi Arabia stating, “We know that Saudi officials are seizing rainbow-colored toys and clothing as a part of an apparent crackdown on homosexuality… I wonder what the White House response is to that given that the President is about to set up his Pride credentials in the next event.”

Despite being the first openly LGBTQIA+ White House Press Secretary, Jean-Pierre said she “wasn’t aware” of the ongoing persecution of members of that community by Saudi officials, and instead said that the White House “We support civil society and providing LGBTQIA+ individuals and communities with tools and resources to prevent, mitigate, and recover from violence, discrimination, and stigma.”

The “resources” provided by the White House to LGBTQ+ individuals facing persecution in Saudi Arabia are unclear.

Despite his goals for LGBTQI+ inclusion, Biden has scheduled a trip to Saudi Arabia next month in an effort to secure more barrels of oil amid record-high gas prices in the US. Amid inflation hitting a 41-year high and the skyrocketing gas, food, and rent prices, Jean-Pierre announced Monday that Biden plans to run for re-election in 2024.