WATCH: Woman pushes HUGE bear off wall to save her pet dogs

In a now-viral video, a California woman is seen pushing a large brown bear off her wall to save her dogs. 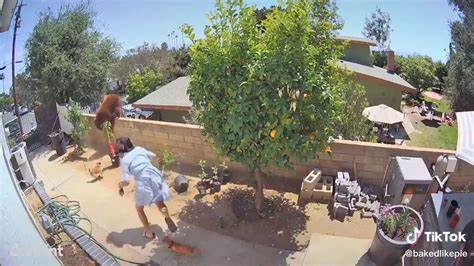 A woman in California posted a video of her confronting a mama bear which has garnered more than 40 million views on Tik Tok. Brenda, who goes by the name Bakedlikepie on Tik Tok posted the video showing her cousin Hailey physically pushing the bear off her perimeter wall after it gets into a skirmish with one of her dogs.

In the home security video, the large bear can be seen walking with at least two cubs on top of a cinderblock wall that looks about 4-5 feet high. When Hailey's dogs see the large intruder they immediately spring into action and get into a physical altercation with the bear. The bear takes three swipes at the larger dog, the last of which connects and sends the dog away wincing.

Hailey can then be seen rushing towards the bears and pushing the mama bear off the wall into her neighbours yard. This ambush by Hailey gives her valiant defenders the chance to escape into the safety of the house and they are able to live to fight another day.

According to the caption by Brenda the dogs all escaped with the largest dog coming away with some scratches from the bear's swipe. In a later video, Hailey explains that she lives in the mountains and bears in the summer are not uncommon to see. Hailey says out of the entire encounter she only suffered a sprained finger.