Who could be the next leaders of the Liberal, NDP or Green Party?

Political leaders come and go. The reins of power never remain too long in the hands of one man or one woman, no matter how secure they might seem at any given moment. 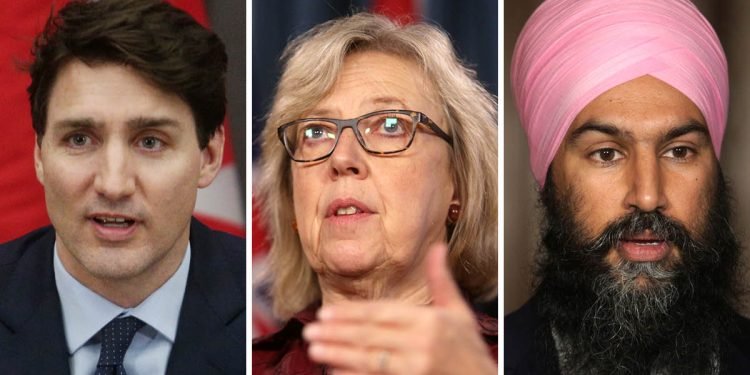 Political leaders come and go. The reins of power never remain too long in the hands of one man or one woman, no matter how secure they might seem at any given moment.

However, one thing is for certain and it’s the fact that the October 2019 election will be a hotly contested one. Over the last few months, popular opinion polls have underwent a dramatic shift,  benefiting some, while harming others.

Currently, Conservative Party leader Andrew Scheer is projected to come out on top in the next election. If the Conservatives form government, several or all of the other parties might be forced to elect new leaders.

In this article, we will speculate on who the new party leaders might be after the next federal election.

The Liberal Party of Canada

The Liberals are definitely the party which has suffered in the last few months. From leaking re-election candidates to plummeting polls, the Liberal Party is currently wading through troubled waters.

Out of all of the parties on this list, the Liberals are most likely to be questioning the capability of their leadership. Here are some candidates who could fill Justin Trudeau’s spot as the leader of the Liberal Party of Canada.

Currently, holding the prestigious post of Canada’s Minister of Foreign Affairs, Chrystia Freeland is our top pick to be Justin Trudeau’s replacement.

First and foremost, Freeland has an internationally recognized face. Her tenure as Minister of Foreign Affairs has been a crash course through international relations.

Having handled the USMCA negotiations and recently securing a drawback from the United States on steel and aluminum tariffs, Freeland would be a very desirable candidate to lead the Liberals into the future.

Morneau, who is currently Minister of Finance might be a good pick for a Liberal Party intending on touting its economic accomplishments after 2019.

While Morneau’s reputation has been blemished by alleged involvement in the SNC-Lavalin affair, he is without a doubt one of Trudeau’s most capable ministers.

Wynne could potentially paint her leadership bid as a comeback in the face of Conservative aggression and point directly to Premier Doug Ford’s handling of her former province.

Although expected to benefit the most from poor Liberal performance, the NDP have displayed a lackluster performance in national polls.

Uneasiness around the leadership of party leader Jagmeet Singh has signaled a deeper discontent in the formerly powerful third-party.

Despite being elected MP during the Burnaby South byelection, Singh has failed to turn the win into popular success. We predict that based on current projections of the party’s performance the NDP will likely be electing a new leader after 2019. Here are Jagmeet Singh’s potential replacements.

Manitoba MP Niki Ashton, competed for the leadership spot of the NDP in 2017. While coming in a close third behind, Charlie Angus, Ashton has proven to be an outstanding voice for the NDP.

Ashton’s youthful vigor and socialist rhetoric would be very appealing to an NDP youth disaffected with the milquetoast rebranding of the party which came after the election failure of Tom Mulcair.

Ontario MP Charlie Angus, who placed second behind Jagmeet Singh during the 2017 leadership race might just be the man to replace the current leader.

Angus, unlike Singh has a working class appeal which would sit well with the NDP base. While serving in the House of Commons, Angus has been a prominent voice on a variety of issues, while also being an apt user of social media.

Despite the former Alberta Premier’s crushing defeat in Alberta, Notley is still praised by many NDP loyalists.

As leader of the federal party, Notley could rebrand herself as the underdog standing up to a conservative menace which swept the province of Alberta from her.

Unlike the NDP, the Green Party has capitalized on the leaking support for the Liberals. Out of all of the left-wing parties, the Greens have been invigorated with new lifeblood.

After the election of a second Green Party MP in British Columbia, the party is making gains unlike ever before. Furthermore, their success as the official opposition in P.E.I. is also a sign  that the electoral winds are changing.

Considering their good performance, the Green Party is the least likely to elect a new leader.

Elizabeth May has led the party to greener pastures. Her ability to navigate the halls of power despite being seen as an insignificant fourth option has endeared her with many people in Canada.

It is unlikely that May will not continue as the future leader of the Green Party.

Although the former Liberal MP and Justice Minister has not announced any party affiliation after being ejected from the caucus, there has been rumors of a potential run under the Green Party banner.

As an MP in British Columbia, which has a history of Green Party success, Wilson-Raybould would be in a strong position to be a potential leader of the party.

As the second ever Green Party MP to be elected into the House of Commons, Manly would be a natural choice for a future leader of the party.