Why We Need Dave Chappelle

the one thing that Chappelle’s show demonstrates is that words actually never will never hurt you unless you are a soulless, control freak who probably ought to rethink participating in civil society. 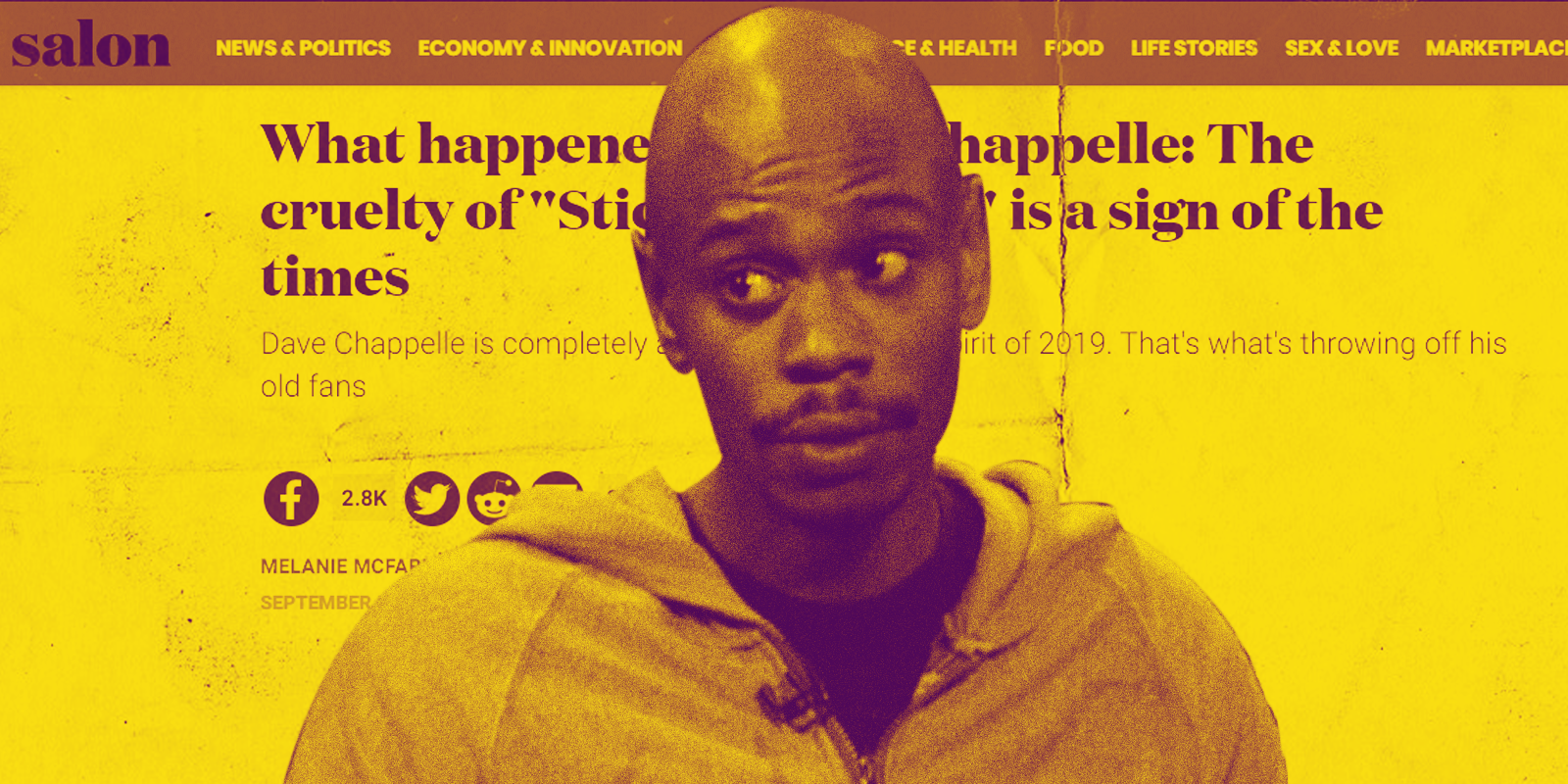 The last decade of social justice vigilance has been the most depressing social era of my adulthood. We have been living in an era where speaking one’s thoughts must be rethought many times over as this current era depends upon our having collective murdered our sense of humour. Yet, somehow there are willing actors in our society who gleefully run about policing any “non-acceptable speech.” Nothing was as depressing to me to read about last year’s incident at the Oscar’s concerning Kevin Hart where Hart was asked to apologize to the “gay community” for a joke. The internet was ablaze with “share this if you think that…” pronouncements about how Kevin Hart was the latest mass murderer.

As a member of the community about whom these comments were ostensibly directed, I read them and had a laugh out of exasperation for what seems to be the insurmountable collective ignorance of now my people’s inability to understand joke from reality, hyperbole from menace, words from violence. And nowhere have we seen such a posturing of purity politics than social media in recent years. Goodness forbid all of our social media posts are put in a grand “Rolodex of sin” whereby at any moment we are called out for having misspoken, mis-thought and worse, having enunciated a question.

Now the latest in this saga of “Thou has murdered me with words” has extended to Dave Chappelle’s latest Netflix special, appropriately entitled Sticks and Stones. This is one of the best critiques of our mass societal delusion I have seen in years and Chappelle is entirely correct in every instance of his critique of our collective cultural need to police language, make armchair verdicts based on our daytime overdose of media about a subject for which we hold extremely curated positions. In short, Chappelle calls out everything and everyone that has attained this status of victim sainthood or media exaggeration as a cause célèbre to include what he refers to as “the alphabet people” and dealing blows to victim sainthood since this is where Chappelle locates where our society has ceased to function with various battling for the gold medal of today’s Oppression Olympics.

Mulling over the Hart scenario from December 2018, Chapelle pivots this the trouble of our society’s inability to understand the difference between the nuances of humour and actual harm. He reminisces to fifteen years prior when he was called out for using a word which Comedy Central’s Standards and Practices office deemed offensive:

At this point in the show the audience roars with applause underscoring the cognitive dissonance existing between the political thought police and the vast majority of society which is clearly in agreement with Chappelle. It’s time for the grown-ups in the room to discuss how on earth we have arrived at this moment in time where language is deemed as “literal murder” and an assignation of being either a Nazi or KKK member, all because women refuse to accept that men can become women.

And if you don’t believe me, just venture into social media which is currently ablaze with every single point Chappelle outlines in his show—from the misogyny of gay men towards lesbians to the incoherence of words that begin to mean nothing since everything is everything in the early 21st lexicon of identity politics. Chappelle is particularly vituperative towards what he calls “the Ts,” or as Chappelle states in his analogy of LGBTQ to a car ride, with everyone getting in that car with their very separate political issues. He states, “Everybody in the car respects the Ts but everyone also resents the Ts It’s not the T’s fault but everyone in the car feels like the Ts are making the trip take longer.” And then Chappelle goes there and tells the Ts to take responsibility for his jokes pointing out the humour as he embodies himself as a trans-Chinese person, pointing out the offence act of what he was doing. All this, sadly, is lost on the thought police who run about calling Chappelle “offensive.” Chappelle even goes after the methodology of #MeToo pointing to the blowback in eight states that have rolled back abortion rights reflecting upon the political tit for tat that goes down when we fail to recognize the difference between actual violence and comedy, between sexual assault and the willing participation in a sex act.

The parallels Chappelle draws between middle America’s heroin epidemic and the “crack epidemic” of the 1980s are chilling, to include his imitating Nancy Reagan querying, “Just say NO—what’s so hard about that?” Chappelle uses this historical comparison to point to the lack of compassion during an epidemic black Americans faced which resulted in incarceration for thousands, adding, “Once it started happening to your kids, you realize it’s a health crisis.”

Chappelle is our secular prophet of necessary truths and the saddest part is that many people are too busy virtue signalling to hear him. Nobody is safe from his reach and I laughed throughout because we are living in an era of Orwellian silencing where it is today profoundly cathartic to hear the virtual “town jester” speak the truth. Most of us watching “Sticks and Stones” understand the political rationale for this show to include its title because we need to be reminded that words are many things—they are offensive, they are instructive, they can even be funny and cathartic. But the one thing that Chappelle’s show demonstrates is that words actually never will never hurt you unless you are a soulless, control freak who probably ought to rethink participating in civil society.

After all, part of living collectively involves all sorts of inconveniences and unpleasantness: From the many sights, sounds, smells and complications of modern bureaucracy, it is undoubtedly a minor risk in the everyday that we will all, at some point or another, be offended by something. Part of growing up and exiting childhood involves learning the lesson that sticks and stones harm but names do not. And I am so deeply grateful that our current era has a comic sage who reminds us to hold dear our humanity least we let it fall into the fascist tides of historical inevitability.