Will Wilson-Raybould and Philpott go Green? We’ll know in June

“I would be surprised if they didn’t make up their minds before sometime in early June,” she said. 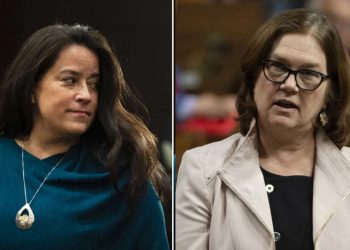 Elizabeth May, the longtime Green Party leader, says she expects the two high profile Liberal cabinet members to decide on whether they will join her party by early June.

Jody Wilson-Raybould and Jane Philpott resigned during the lengthy SNC-Lavalin scandal that rocked the Trudeau government for the nearly three months.

Currently, they both sit as independent MPs following their ejection from the Liberal caucus by Prime Minister Trudeau last month.

Wilson-Raybould attended May’s wedding in Victoria last month where she told reporters that she’d had “several conversations with Elizabeth, no decision has been made yet.”

Both May and NDP leader Jagmeet Singh have floated the idea of luring the two former cabinet ministers into their respective parties. May has said her invitation remains wide open.

“I make no bones about the fact that I would love that,” May said in an interview on CBC Radio’s The House with Chris Hall.

May mentioned that she had talked with both women, but was still unsure of what their final decisions would be.

“I honestly can’t tell you, sitting here right now, whether they would really seriously become Green candidates or not.”

“I would be surprised if they didn’t make up their minds before sometime in early June,” she said.