Sero reportedly suffered a broken clavicle from the trampling. 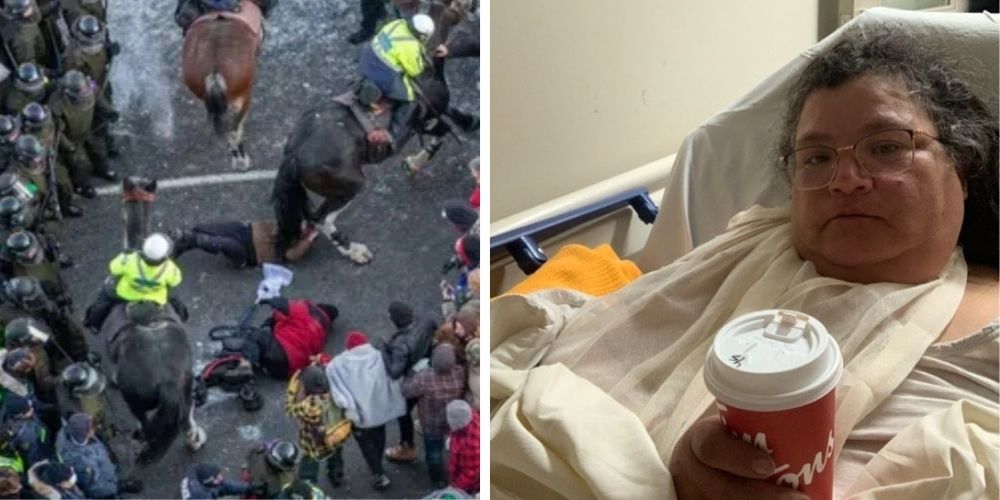 The elderly woman who was reportedly injured when police on horseback rode through a crowd of Freedom Convoy protesters Friday evening has been identified as Candice "Candy" Sero. She is reportedly a full-blood Mohawk woman who lives in Tyendinaga Mohawk Territory in Hastings County, Ontario.

According to a woman claiming to be Sero's niece, she said in a Facebook post Saturday that her alleged aunt is "very much alive" after false reports over the weekend said that the injured woman had passed away from the incident.

Footage showed mounted police officers charging through a narrow opening in the pro-freedom crowd, knocking down some people on the way through.

One of those who were knocked down was Sero, who was seen in video and photographs lying in the middle of the horses with her walking assist device.

According to her alleged niece, Sero suffered a broken clavicle from the event.

"Now stay away from the horses," Sero's alleged niece joked.

Video shows Sero in a wheelchair, with the woman who took the video saying "born to be alive." Someone in the background shouts, "Hold the line!"

A video on YouTube shows Sero in Ottawa with her car, which had been signed by numerous protest attendees, days before the viral trampling incident.

Shortly after the incident occurred on Friday, Fox News contributor Sara Carter wrote on Twitter at the time that Sero may have passed away in the hospital. Conflicting reports said that the woman was merely injured.

Carter later apologized the following morning for her tweet, stating that the reports she was given "from sources on the ground that someone may have died at a hospital during the trampling was wrong." Carater said "someone was taken to a hospital with a heart condition-not due to trampling."

"I want to clarify this again and apologize for any confusion," Carter tweeted.