Yuma, Arizona near collapse due to Biden's border crisis

"Policies need to be changed when you see an unprecedented amount of people coming across the border that even supersedes what we saw under any of the other presidents for the past 30 years." 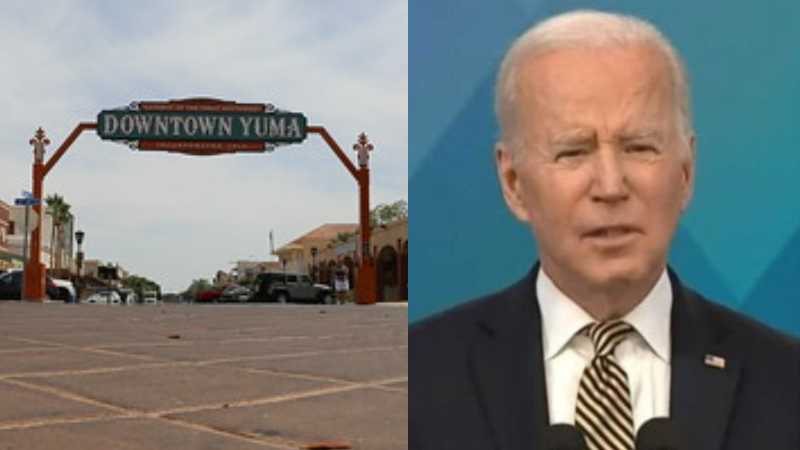 "Policies need to be changed when you see an unprecedented amount of people coming across the border that even supersedes what we saw under any of the other presidents for the past 30 years," Yuma County Supervisor Jonathan Lines told Fox News. "And they're coming because they said that Biden told them to come, that we have an open border."

"It will only get worse with Biden's policies," he added. "He needs to reassess."

Lines also spoke out last week about how Mexican cartels have control over the US-Mexico border, using their position to smuggle drugs and violent criminals into the country at the expense of the safety of Americans.

Since the start of the Biden administration, around 5 million migrants have crossed over into the US from Mexico, overwhelming many of the communities along the southern border. The city of El Paso, Texas, declared a state of emergency last month due to thousands of migrants crossing into the community every day and overwhelming services.

"The problem that we're foreseeing right now is there's a couple of big waves coming," a Yuma resident and fifth-generation farmer, Hank Auza, told Fox News. "Yuma can't support that. It will overwhelm the system here."

Due to agricultural production making up such a large part of the city's economy, there are concerns about food security from farmers and officials.

"Our fields are monitored and audited and tested for different pathogens," Alex Muller, another Yuma farmer, said. "You can't have people walking through the field."

Yuma's fields produce around 93% of the nation's leafy greens in the winter months, but the increased migrant traffic damaging crops and bringing foodborne illnesses is putting that industry in jeopardy, Auza said.

He also added that residents are having a hard time getting help in the city's only hospital due to the influx of illegal immigrants clogging up the health services.

Biden made his very first border trip in January, arriving in El Paso, Texas, to unveil some tighter border restrictions, including Title 42 expulsions for certain nationalities. Lines said that while is is a step in the right direction, the president and other administration officials need to witness how the crisis affects other communities along the nearly-2000 mile-long border.

"I've invited them several times, and I would invite them again right now," Lines said. "Please come and see for yourself."

The 2023 fiscal year has seen the border crisis surge to historic levels, with no signs of it slowing down as it continues to have in increasing impact even on major cities far from the southern border.
ADVERTISEMENT
ADVERTISEMENT
Biden Yuma