The 15-year-old boy was shot in the chest along with a 30-year-old man at Lexington Avenue and East 123rd Street in East Harlem. The boy was pronounced dead at a local hospital. 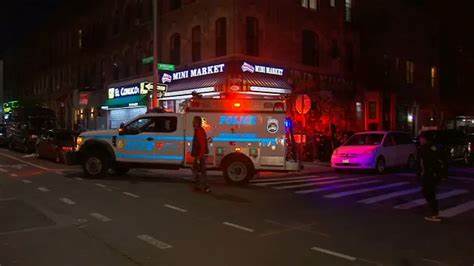 A 15-year-old boy was murdered, and eight others were injured in a shootings on Memorial Day as New York City reopens.

"The sun is out, so guns are out," one Brooklyn cop told the New York Post as Monday saw a rush of shootings across the entire city. A 15-year-old boy who has not been identified was killed along with eight others being wounded by gunfire. The violence comes as shootings are up 166 percent compared to this time last year.

The 15-year-old boy was shot in the chest along with a 30-year-old man at Lexington Avenue and East 123rd Street in East Harlem. The boy was pronounced dead at a local hospital. The police are still waiting to contact the boy's family before releasing his name to the public. Another man was struck in the knee by the gunfire and is in stable condition.

Four men were wounded in a possibly gang-related shooting near Bushwick, Brooklyn, around 8 pm after an unknown number of shooters opened fire. The four men were taken to hospital, and their conditions are unknown. On Staten Island, two men were shot just after 8 pm.

A 19-year-old was shot in the arm and a 20-year-old in the leg. The shooter fled into a wooded area nearby, and the two men are expected to survive without serious complications. One man was shot in the Bronx shortly after 11 pm, there are few details at this time.