"There's nothing close to inappropriate in the post. And this is what we expect from Twitter so it's nothing new, it's just a very funny and over-the-top case," Ottman said. 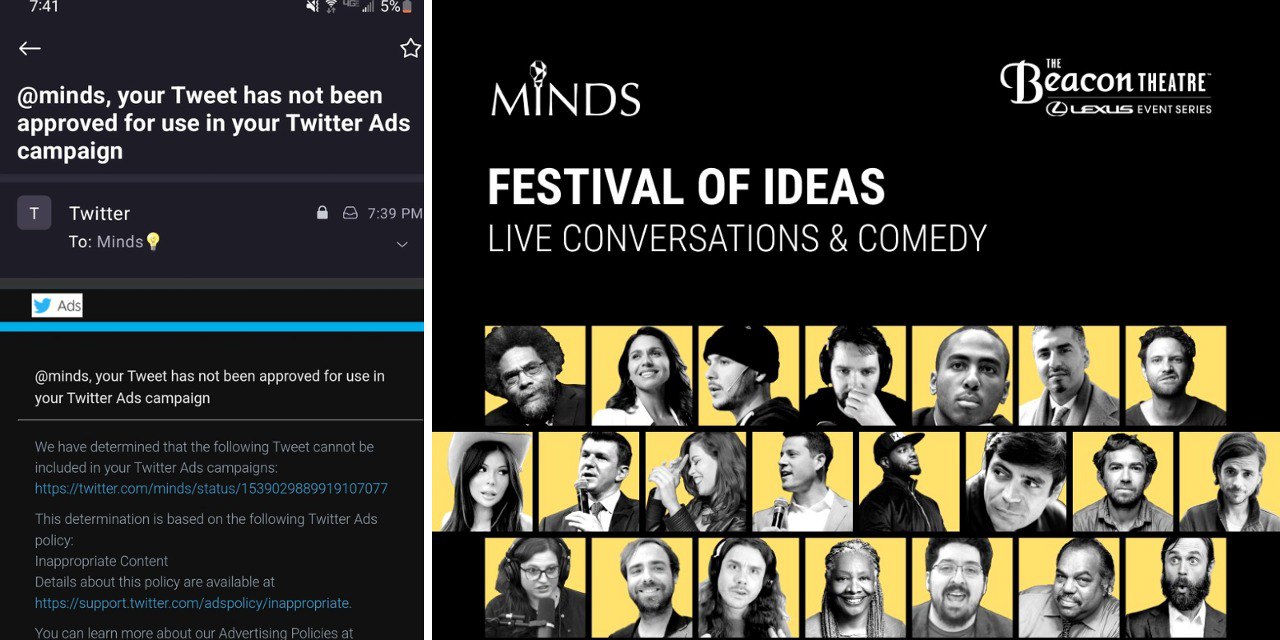 An ad posted by the Minds Festival of Ideas to Twitter was censored on Monday, and the group was denied the ability to purchase ad space. The Minds Festival of Ideas, featuring notable names in contemporary heterodoxy and coming to New York's Beacon Theater on Saturday and featuring, was prevented from sharing the ad only seconds after submitting it for Twitter review.

In the view of Minds co-founder Bill Ottman, "The rejection email came immediately after pressing the submit button on the promotion, which makes it feel like it wasn't reviewed by a human." Minds called the bizarre response something out of a "dystopia."

"It was deemed 'inappropriate' instantly by an account restriction or maybe some AI/ML trigger," Ottman told The Post Millennial.

The ad featured photos of those slated to speak, along with the caption: "Minds Festival is proving that people with opposing views still want to have productive conversations and have a good time together." A link to tickets was available.

"There's nothing close to inappropriate in the post. And this is what we expect from Twitter so it's nothing new, it's just a very funny and over-the-top case," Ottman said.

After Minds posted to Twitter that they were prevented from buying an ad, they added a post to Twitter support suggesting that the ad must have been rejected in error.

The Minds Festival of Ideas is intended to bring "people together IRL from across the social and political spectrum to facilitate real conversations, human connection and the evolution of ideas. MINDS: Festival of Ideas will feature prominent voices who will come together to have civil dialogue on the important topics of the day. The goal of the event is to create a space to engage honestly with others in open dialogue surrounding divisive ideas in hopes to bridge the current divide and create a path to a healthier discourse and reduce extremism."