'Always be humble and look at the positive in life': Kyle Rittenhouse at AmericaFest

"I pray for strength and never prayed for the acquittal I just pray for the strength to get through whatever happens to me," Rittenhouse said. 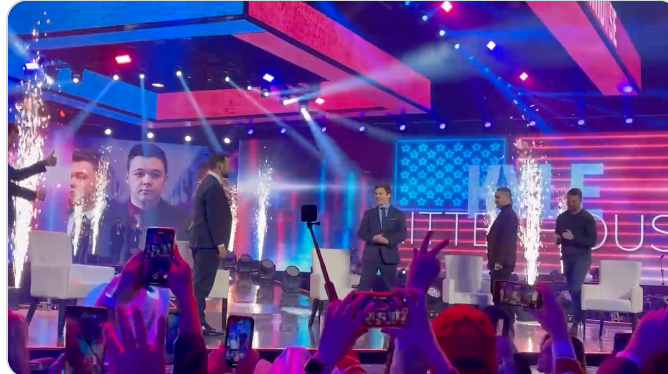 Kyle Rittenhouse entered TPUSA's AmericaFest like a war hero coming home. Walking with a security entourage onto media row, students, attendees, and many in media showed their support with cheers, applause, and shouts.

The young man who has just undergone the trial of his life was fully welcomed by the young, conservative community who supported him throughout his trial, and see him as an example of truth winning over lies of justice over tyranny.

On a stage before a packed house, Rittenhouse joined Jack Posobiec, Charlie Kirk, and independent journalists Drew Hernandez and Elijah Schaffer, to discuss the trial that so many in the crowd had followed so closely.

It wasn't the details of the trial that the crowd was interested in, but the experience of feeling so fully that his life, his future, and his fate were in the hands of a jury of his peers who had to make the decision as to whether his actions were criminal or justified. Rittenhouse shared some of the emotions that were with him during his ordeal.

"God was with me every day through the trial," Rittenhouse said. "Everyday He helped me get through this. I pray to him every single night. I pray for strength and never prayed for the acquittal I just pray for the strength to get through whatever happens to me."

Rittenhouse was asked about those who have lined up against him, including New York Congressman Jerry Nadler, who has called for a Department of Justice investigation into Rittenhouse. To Nadler, Rittenhouse had this message:

"I would urge him to go back, watch the trial and look at the facts before he tweets," Rittenhouse said. Nadler notably was the Congressman who said that Antifa doesn't exist.

Much of the media narrative that was spun around the riots, Rittenhouse, and the trial were lies. Mainstream media said that Rittenhouse brought a gun across state lines, but the gun never left Wisconsin, where it was purchased.

"I think my trial was an example of them trying to come after our second amendment rights, our right to defend ourselves, and trying to take our weapons," Rittenhouse said.

His message for the crowd was to "always be humble and look at the positive in life and focus on today. Not tomorrow. We can only live one day at a time."

The crowd rejoined with a standing ovation for the teen whose life is forever changed by a riot, by shooting in self-defense, and by a trial that gripped the nation.