It is reported that Amazon’s newest HQ will bring approximately 37,850 jobs to Arlington, VA. 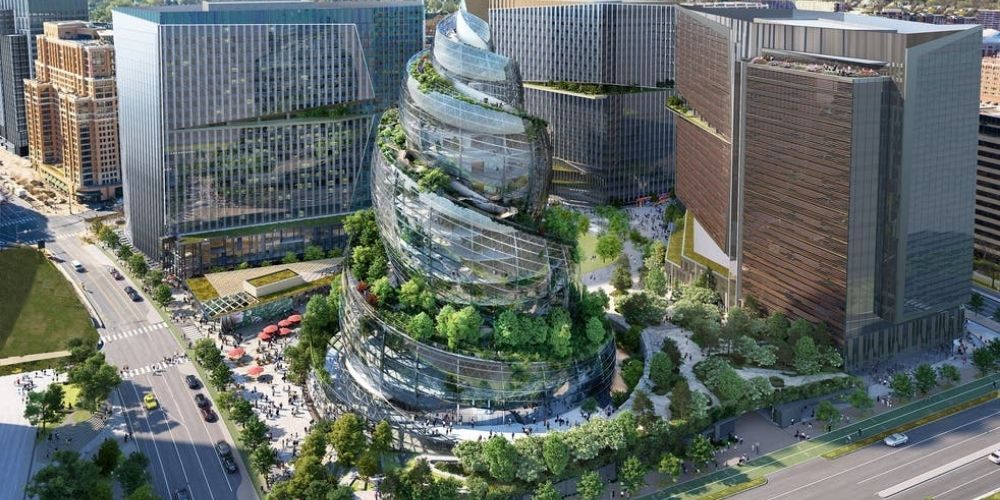 Amazon recently announced 'HQ2' will be moving to Arlington, Virginia, and on Tuesday the Corporation unveiled plans for their futuristic building, shaped after a double-helix, as the heart of their new complex.

According to The Washington Post, "Amazon officials said the structure is intended to be an alternative workspace, not a traditional office building, where employees would be able to air out ideas and find downtime beyond their cubicles. Trees dot terraces along two walkways that spiral upward, evoking the feel of a stroll through the Blue Ridge Mountains. The streetscape below, with wood-frame retail pavilions and green space, is designed to appeal to people and keep them around when the workday ends."

The 350-foot-tall helix shaped building was designed by architectural firm NBBJ to reflect nature’s fondness for the helix in areas from DNA to the Milky Way galaxy, as reported by The Washington Post.

Architectural firm NBBJ is also the team behind the design of the ‘Seattle Spheres’ at Amazon’s original headquarters in Seattle, WA.

While some praised NBBJ’s newest helix-shaped design, many criticized the design on social media with some referring it to as looking like a Christmas tree of the poop emoji.

“This isn’t just about work. It’s about how you interact with your community,” said architect Dale Alberda of NBBJ. Amazon’s newest corporate complex will include a community center, an amphitheater, a dog run, new bicycle lanes and 2.5 acres of green space that would be open to anyone. The Helix would include an artists-in-residence program and on occasional weekends would open its doors to the public.

Amazon announced a search for a city in 2017 to host their new HQ which resulted in a bidding war between 238 interested metropolitan areas. Amazon eventually narrowed the list down to 20 prospects, ultimately choosing between New York City and Arlington, Virginia.

Amazon announced plans to bring their new HQ to New York City but were met with determined activists who were strongly against Amazon’s decision to move to the city which escalated into an intense legislative nightmare between the New York City Council, the New York State Senate and Amazon, essentially resulting in Amazon withdrawing from New York City.

It is reported that Amazon’s newest HQ will bring approximately 37,850 jobs to Arlington, VA.