Seattle, a hotbed of antifa activity in the past, saw peaceful protests that turned violent and destruction due to these activists. The city was unprepared. 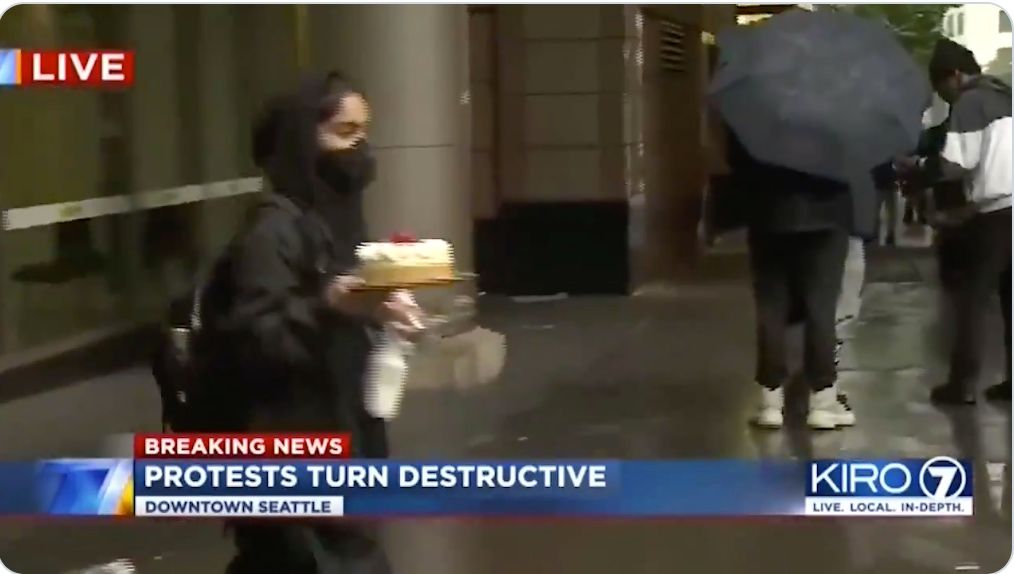 What began as a peaceful protest in downtown Seattle, became a full blown riot due to antifa activists. Hundreds of protestors showed up Saturday for the “March for Justice #George Floyd” event. As the peaceful march reached the Westlake area Saturday afternoon, a second group arrived in the area and according to witnesses it was made up of mostly white, young, masked antifa activists began throwing rocks and attacking police officers.

Rioters began breaking into retail stores and looting while police began firing tear gas. Many businesses downtown have been boarded up for weeks because of local coronavirus response shutdown orders, but this did not stop business owners from coming down to check on their locations, many seen overcome by emotion watching their life’s work and livelihood destroyed.

At perhaps the most surreal moment of the riot, Kiro 7 news captured video of an alleged rioter leaving the Cheesecake factory carrying an entire intact cake.

Downtown residents were ordered to shelter in place while Governor Jay Inslee deployed 200 National Guard troops to assist the police officers. Inslee specified in his tweets and announcements that the National Guardsmen would be “unarmed” even though rioters, while destroying police cruisers, stole 2 AR-15 assault rifles from the cruisers. At least one of the rifles appears to have been recovered by a security guard for local Q13 Fox reporters.

As the riots grew, areas of I-5 were closed and traffic was diverted away from downtown.

According to witnesses, Police reinforcements did not appear in the downtown area until hours after the riots began and that it appeared as if police had been given a stand down order because they were not making arrests while watching stores being looted.

The tweet was later deleted after being called tone deaf and insensitive. Local Marxist City Council Member Kshama Sawant was also called out on social media for encouraging the riots.

By 9 p.m. the majority of the rioters had dispersed while police stood guard over destroyed stores.

With cities across the US facing similar riots and downtown Portland being looted and destroyed by antifa activists the night before, many questioned why Seattle leaders were not prepared for a similar occurrence. Seattle has been a frequent location of antifa activity.

Antifa allies and supporters on social media continued to encourage the riots through multiple posts throughout the evening. This author will not share them and give them the attention they crave.

In the aftermath of the riots many questioned the logic of the police possibly being given an order not to arrest looters, Mayor Durkan banning legal gun owners from protecting themselves and their livelihood and Governor Inslee sending National Guard troops unarmed into an area described by many as a war zone. This in addition to other local officials seeming to encourage the destruction. The main question echoed by many Seattle residents on social media was in the wake of riots across the country “why were Seattle leaders not prepared for this?”