The Biden administration changed the definition of the word recession last week in anticipation of new numbers coming out that are likely to show that the US is in fact in a recession. 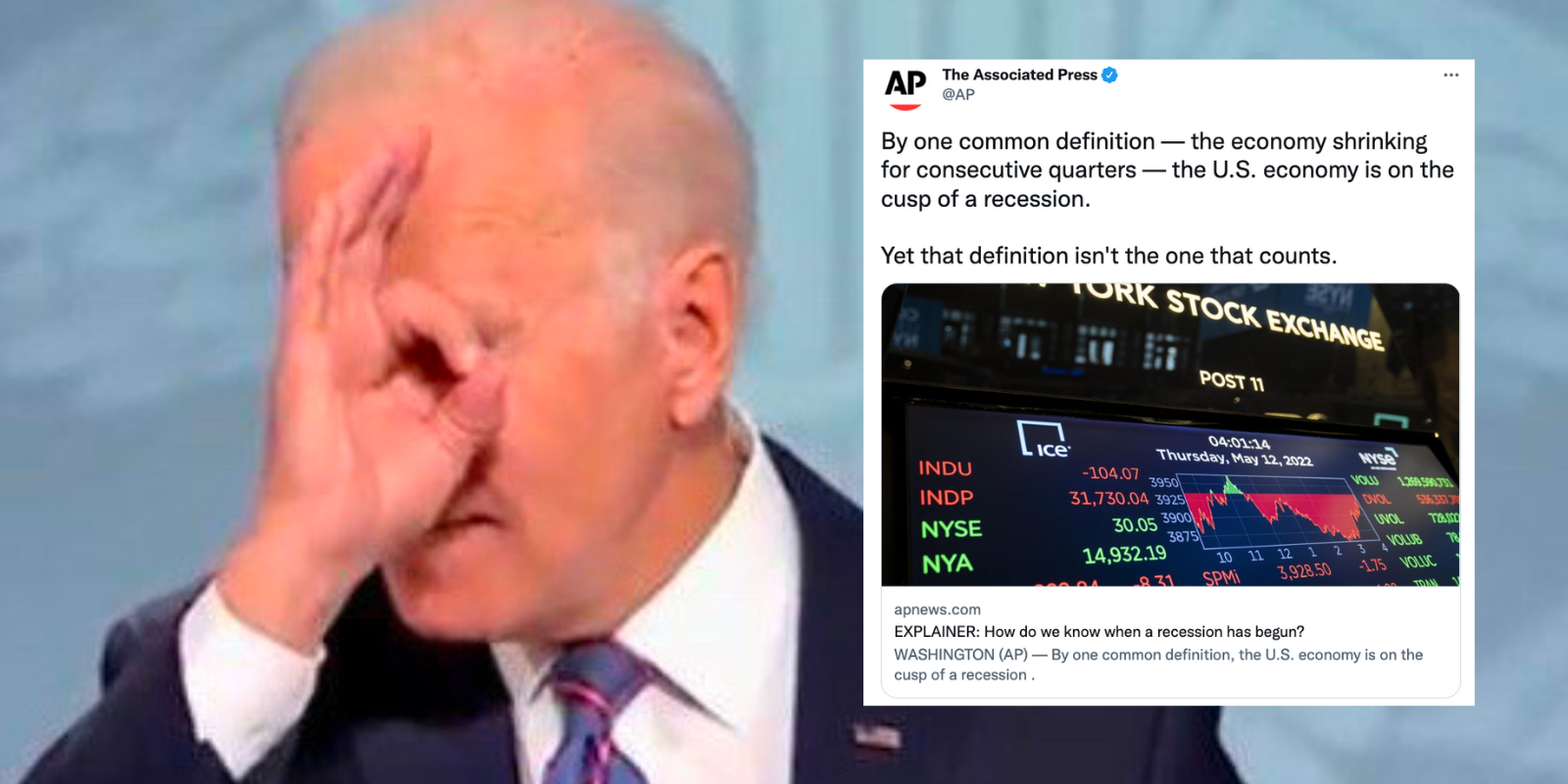 The AP has issued a fact-check by way of an explainer for the word "recession" following the Biden administration's redefining the word to mean something other than two-quarters of declining GDP growth. After the White House issued the definitional change, Treasury Secretary Janet Yellen was trotted out to drive the point home.

"As she explains," the White House explained, which was later re-explained by the AP as the messaging solidified, "the technical and actual definition of a recession takes into account 'a broad range of data' and states 'this is not an economy that's in recession.'"

For months, media has been telling Americans that the country is not in a recession, not facing a recession, that it's just too hard to say, that inflation is not that big a deal, and that there's really nothing to worry about. Meanwhile, job numbers were down in June, and some industries, such as construction, saw a distinct decline in hiring.

The Biden administration changed the definition of the word recession last week in anticipation of new numbers coming out that are likely to show that the US is in fact in a recession. But, the AP is quick to point out, that's per the old definition. The new definition, leaning heavily on low unemployment numbers, wouldn't necessarily mean that a recession had begun.

According to expert economists, writes the AP, a decline in GDP growth for two straight quarters "wouldn’t mean that a recession had started. During those same six months when the economy might have contracted, businesses and other employers added a prodigious 2.7 million jobs—more than were gained in most entire years before the pandemic. Wages are also rising at a healthy pace, with many employers still struggling to attract and retain enough workers."

And in response to all this, the Federal Reserve is expected to increase short-term interest rates, again. And inflation, of course, is at a more than 40-year high.

But the Biden administration, per the AP's explainer, would rather Americans look at different numbers, and not pay too much attention to either inflation or rising interest rates. Instead, they want us to consider "gross domestic income," which was up 1.8 percent in the first quarter as GDP declined by 1.6 percent.

"What is a recession?" The White House asked on Thursday.

"Instead, both official determinations of recessions and economists’ assessment of economic activity are based on a holistic look at the data—including the labor market, consumer and business spending, industrial production, and incomes. Based on these data, it is unlikely that the decline in GDP in the first quarter of this year—even if followed by another GDP decline in the second quarter—indicates a recession."

Despite all this, The New York Times writes that "economists agree that the risks of a recession are rising." And the National Bureau of Economic Research has said that "The NBER's traditional definition of a recession is that it is a significant decline in economic activity that is spread across the economy and that lasts more than a few months."

Bloomberg writes that "Rather than two negative GDP readings, the NBER is looking for a substantial decline in activity over a sustained period of time. The committee sets dates of the peaks of economic activity and troughs based on six monthly data series, including nonfarm payrolls, personal consumption spending and industrial production."

The AP notes that Americans "think a recession is coming" because "many people now feel more financially burdened."

While unemployment is low, wage gains are lagging behind inflation, meaning that Americans' paychecks are not going as far as they used to. Mortgage rates have doubled from a year ago, meaning that home sales have fallen. These higher interest rates also mean that businesses are less likely to take out loans to invest in growing those businesses, and less growth means less hiring down the road.

"The Fed’s rapid rate hikes have raised the likelihood of recession in the next two years to nearly 50%, Goldman Sachs economists have said. And Bank of America economists now forecast a 'mild' recession later this year," the AP reports.