"This is truly sick. 19 innocent children and 2 hero teachers were killed... and to the Divider-in-Chief, the real victim of Uvalde is George Floyd?" 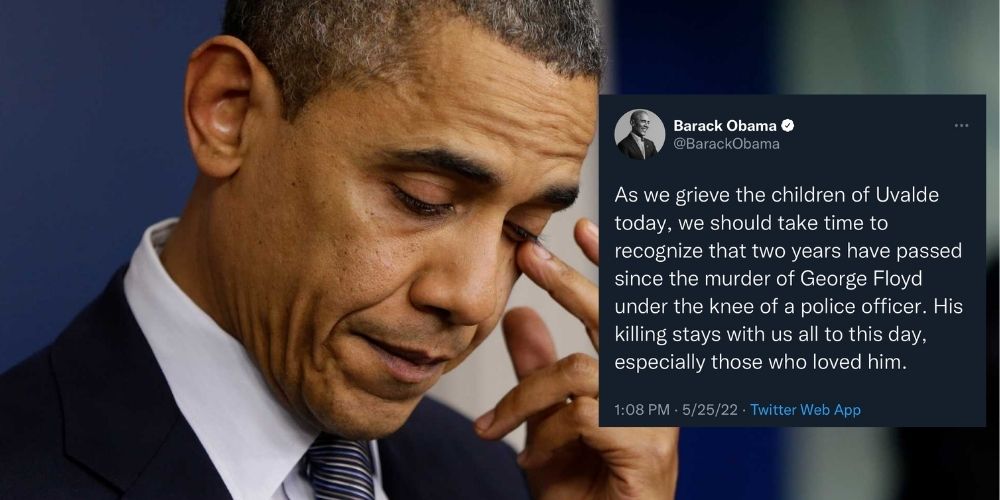 Former President Barack Obama drew heavy criticism on Wednesday when he attempted to link the Texas school shooting massacre to the anniversary of George Floyd's death.

The tragedy that occurred at Robb Elementary School in Uvalde, Texas left nineteen children and two teachers dead when a gunman entered the 4th grade classroom and shot them to death.

Tuesday's mass shooting, which is among the worst in US history according to death toll numbers, came one day prior to the two-year anniversary of George Floyd's death, which sparked civil unrest across the nation. Minneapolis police officer Derek Chauvin was convicted of second and third-degree murder last year in Floyd's death.

Obama tied the mourning of murdered children while reflecting on the anniversary of Floyd's death.

"As we grieve the children of Uvalde today, we should take time to recognize that two years have passed since the murder of George Floyd under the knee of a police officer," Obama said in a tweet on Wednesday. "His killing stays with us all to this day, especially those who loved him."

"In the aftermath of his murder, a new generation of activists rose up to channel their anguish into organized action, launching a movement to raise awareness of systemic racism and the need for criminal justice and police reform," the former democratic president continued.

The post caused backlash across social media and critics were quick to respond to Obama's "tone-deaf" comparison between the mass shooting and police brutality.

"This is truly sick. 19 innocent children and 2 hero teachers were killed... and to the Divider-in-Chief, the real victim of Uvalde is George Floyd?" Florida press secretary Christina Pushaw said.

"So you want a bunch of grifters like BLM to exploit people’s grief, use false allegations of system racism to bilk people out of millions of dollars to purchase luxury properties for themselves? But now you want the grifters to grift in the name of 19 dead children? Disgusting," conservative commentator Liz Wheeler added.

"Brah, this ain't it. Little kids slaughtered at school is not the equivalent of Floyd dying after resisting arrest while high," Blaze Media podcast host Jason Whitlock wrote, declaring, "This is one of the worst tweets in history."