Midler previously tweeted on May 25 that the protest should resemble that of Jan 6, 2021, when protestors stormed the nation's Capitol in Washington DC. 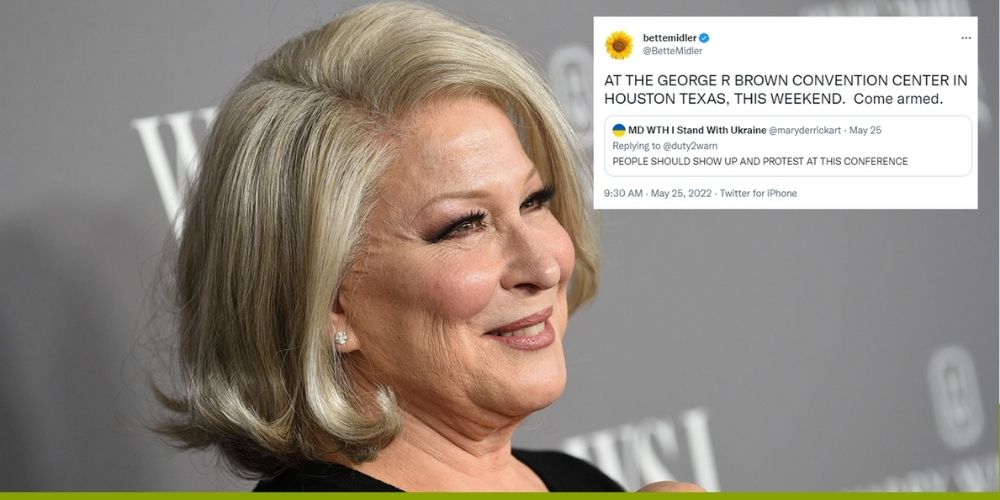 Critics are up in arms over a Wednesday tweet by celebrated actress and singer Bette Midler, who tweeted to her millions of followers that they should "come armed" to protest an NRA conference which was held in Houston, Texas over the weekend.

"AT THE GEORGE R BROWN CONVENTION CENTER IN HOUSTON TEXAS, THIS WEEKEND.  Come armed," read the tweet, which is still up as of the time of this writing.

Midler previously tweeted on May 25 that the protest should resemble that of Jan 6, 2021, when protestors stormed the nation's Capitol in Washington DC. Midler said that the NRA, deserved "a taste of their own medicine."

Midler's shocking "call to arms" came on the heels of the deadliest school shooting incident in a decade, where 19 students and two teachers perished at the hands of a lone gunman in Uvalde Texas, amid official inaction.

Even Midler's fellow liberals did not support the star's tweet.

Replies to the tweet were overwhelmingly negative, with people telling Midler they "HOPE it's a joke," adding that she's "acting like a Republican." Others called the tweet "monumentally stupid," and said the tweet is gonna "get people killed." Some called it "the wrong take" and on more than one occasion, called her tweet "irresponsible."

"American Pie" singer Don McClean announced on Wednesday that he would no longer be performing at the NRA conference after the shooting at Robb Elementary School in Uvalde, Texas.

McClean told Fox News Digital, "In light of the recent events in Texas, I have decided it would be disrespectful and hurtful for me to perform for the NRA at their convention in Houston this week."

He added, "I’m sure all the folks planning to attend this event are shocked and sickened by these events as well. After all, we are all Americans. I share the sorrow for this terrible, cruel loss with the rest of the nation."