Public comments on the docket "Nondiscrimination on the Basis of Sex in Education Programs or Activities Receiving Federal Financial Assistance" are up to nearly 350,000. 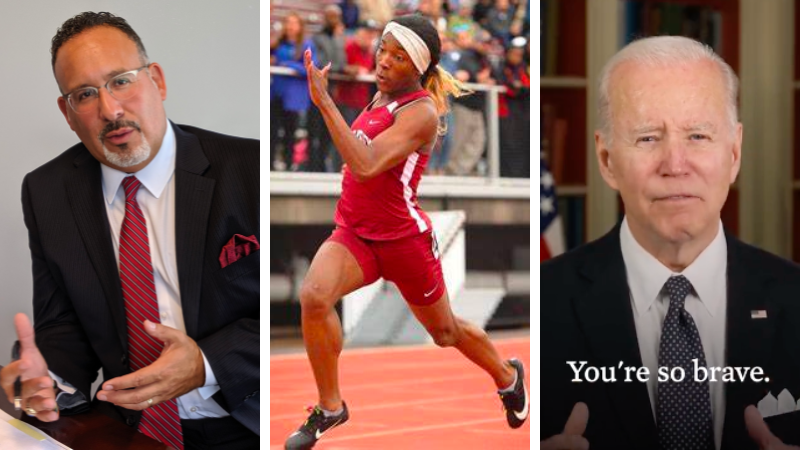 The Biden administration has proposed changes to Title IX of the Civil Rights Act of 1964 that would conflate gender identity with biological sex, and require that protections for women be expanded to protect those who identify as women despite being biologically male. The comments period is open for these proposed changes, and the public appears to be roundly opposed.

Public comments on the docket "Nondiscrimination on the Basis of Sex in Education Programs or Activities Receiving Federal Financial Assistance" are up to nearly 350,000. The proposed regulations are already causing turmoil in states that prohibit biological males from playing in women's sports or using women's facilities, regardless of their gender identity.

The father of a kindergartener in Kansas writes "The proposed regulations would threaten girls’ privacy / safety / sport’s and academic opportunities by permitting boys in places that are designated for girls. Let alone let boys into girls sports which has proven to be an atrocity. All that women and girls have fought for is now being stripped away."

"You are using non-discrimination laws in an illegal and unconstitutional way, and if this hits my kids’ school, we will file a lawsuit," reads another comment.

"For fifty years, Title IX has provided important protections and opportunities for women by prohibiting discrimination on the basis of sex. While parents across the country are demanding the rejection of 'woke' policies, the Department of Education instead has chosen to hijack Title IX to force gender ideology on children without their parents’ knowledge or approval. This proposed rule is a lawless interpretation and is a complete overreach by the Department of Education," reads another.

"America's girls deserve better. This is more insanity from the Biden Regime. I urge you to rescind this rule," reads another, that also indicated concern over educational indoctrination in schools where students are already reeling from pandemic-era learning loss.

Education Secretary Miguel Cardona, who pushed these same regulations during his time in the Connecticut Department of Education, has backed these changes. The proposal was made in response to Biden's executive order, signed on his first day in office, demanding that all federal agencies come up with plans to be more inclusive of gender identity in their policies and practices.

A lawsuit against the DOE is currently pending, brought by 20 Attorneys General. It led a federal judge to issue an injunction to prohibit the Biden administration from withholding funding from educational institutions that do not abide by their new definition of Title IX.

The Department of Education will have to wait until their proposed changes are final before penalizing institutions for safeguarding women and women's athletic opportunities. The public comment period is still open.

A nationwide poll recently showed that most Americans believe that biological males should not be permitted to play on women's sports teams, regardless of their gender identity.

Those who back the changes believe that not allowing student-athletes to compete according to their gender identity prohibits them from playing student sports. However, students who identify as transgender are not prohibited from playing sports, they, like all other students, are required to play on teams that correspond to their biological sex.