In the holiday edition of "President Biden's Top List of Accomplishments," he took credit for bringing together Democrats and Republicans while simultaneously calling the GOP "extreme." 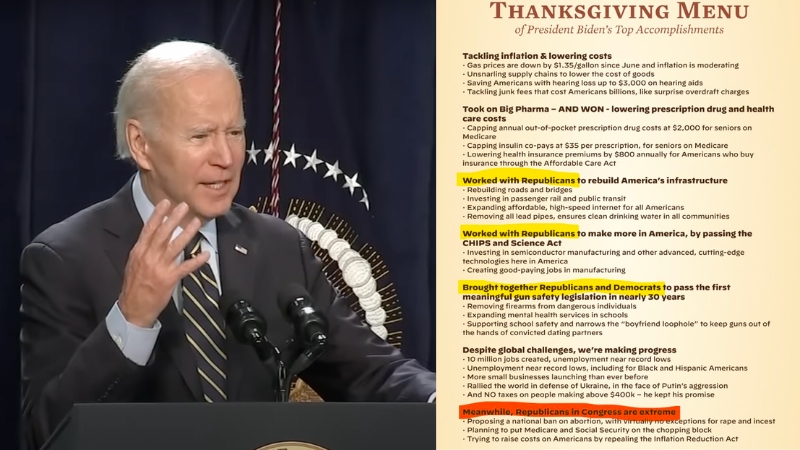 Olivia Rondeau
Nov 23, 2022 minute read
ADVERTISEMENT
ADVERTISEMENT
As Thanksgiving approaches, Joe Biden's White House released a list of "talking points" for when "chatting with your Uncle," touting the administration's supposed accomplishments. In the holiday edition of "President Biden's Top List of Accomplishments," he took credit for bringing together Democrats and Republicans while simultaneously calling the GOP "extreme."

White House chief of staff Ronald Klain shared the list to Twitter on Wednesday, writing "One last item for your Thanksgiving dinner: some talking points when 'that Uncle' comes 'at you' about @POTUS."

Biden claimed to have "worked with Republicans" to "rebuild America's infrastructure," and to "make more in America, by passing the CHIPS and the Science Act."

The talking points list then went on to take credit for passing "the first meaningful gun safety legislation in nearly 30 years," referring to the Bipartisan Safer Communities Act signed into law in June.

Then, as highlighted by co-founder and president of RealClearPolitics Tom Bevan, Biden wrote "Meanwhile, Republicans in Congress are extreme."

According to the White House, the GOP is "extreme" for "proposing a national ban on abortion," "trying to raise costs on Americans by repealing the Inflation Reduction Act," and for "planning to put Medicare and Social Security on the chopping block.

On the validity of the claims that the Democrats' 755-page, $739 billion spending plan actually being economically beneficial for the majority of Americans, it will actually raise taxes on middle class Americans.

An early analysis by the nonpartisan Congressional Budget Office (CBO) shows that Americans earning less than $400,000 will pay roughly $20 billion more than they currently are across the next decade, the New York Post reported.

Among the praises of the 80-year-old president were credits for "tackling inflation and lowering costs," including lowering gas prices.

As for the cost of the average Thanksgiving meal, it's actually risen by 12 percent since last holiday season, including the price of turkeys, which have shot up by an astonishing 73 percent. In 2021, Americans paid the highest ever recorded price for a Thanksgiving dinner for ten, at an average price of $53.32, according to Statista.

The effects of inflation have yet to subside, with this year's cost being estimated at $67.78, the Daily Mail reported.

According to the US Department of Agriculture's (USDA) Economic Research Service, the food-at-home (grocery store or supermarket food purchases) Consumer Price Index (CPI) was 12.4 percent higher in October compared to the same time last year.

As for gasoline prices, the national average is currently $3.61 per gallon, according to the American Automobile Association. In 2020, before Biden took office, the average gas price was $2.17.
ADVERTISEMENT
ADVERTISEMENT
biden menu