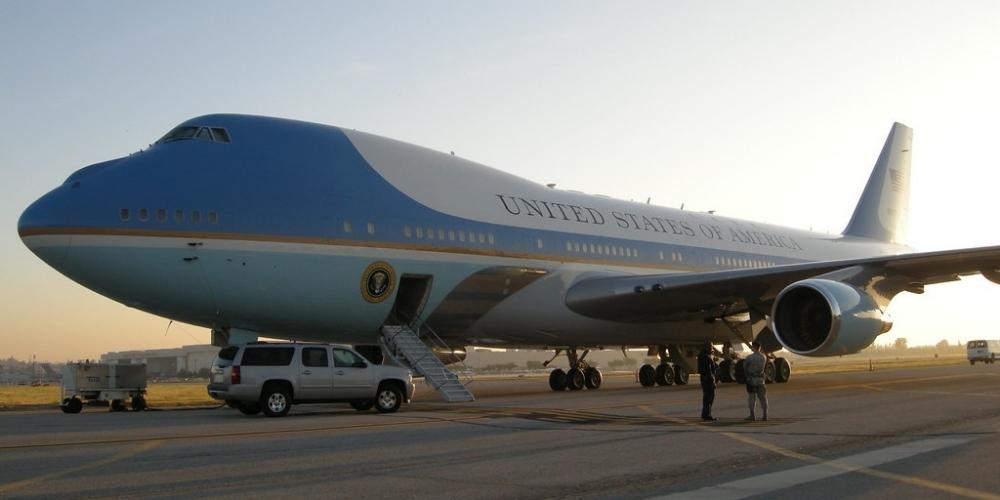 President Biden traveled to Massachusetts on Air Force One Wednesday to speak about climate change linked to the usage of fossil fuels, while he and his crew spewed greenhouse gasses into the atmosphere.

The 416.5-ton presidential aircraft landed in Warwick, Rhode Island, where Biden joined a largely gasoline-powered motorcade to travel 25 miles to the Brayton Point Power Station – a former coal-burning plant that is transitioning to offshore windmill-generated energy, in Somerset, Massachusetts, according to the New York Post.

A decoy presidential plane procedurally makes the same trip as well, adding to the amount of carbon dioxide emitted by the fleet. Additionally, two C-17 military planes that transport Secret Service vehicles flew to Rhode Island a day ahead of the president to handle security precautions.

The fossil-fueled visit occurred as the Biden administration considers designating climate change as a national emergency in order to bypass congressional gridlock over new environmental regulations that would cost taxpayers billions of dollars. The trip has also taken place as Biden’s Special Presidential Envoy for Climate, John Kerry, faces criticism for pushing for a mass production of "clean energy" while experts warn of shortages. Additionally, the climate czar's family private jet has emitted a stunning 300 metric tons since Biden took office last year, according to Fox News.

The president himself is no stranger to excessive travel, as he usually spends his weekends at his residences in Delaware or Camp David, Maryland. Traveling to either requires a significant use of greenhouse gasses by the Marine One helicopter, associated military aircraft, and extensive on-ground transportation.

Manchin, who is a former coal industry leader, said he blocked the new spending because he’s concerned about inflation hitting a fresh 41-year high of 9.1 percent in June.

"I said, 'Chuck until we see the July inflation figures… basically Federal Reserve rates, interest rates, then let's wait till that comes out so we know that we're going down a path that won't be inflammatory, to add more to inflation,' " Manchin said on the Talkline radio show.

However, according to White House press secretary Karine Jean-Pierre, Biden is looking to override congressional power sometime in the near future.

"I would not plan an announcement this week on a national climate emergency. Again, everything is on the table. It's just not going to be this week on that decision," White House Press Secretary Karine Jean-Pierre told reporters on Tuesday.

Despite his gas-guzzling frequent flights and motorcades, the president has proposed ambitious environmental plans in past remarks. In April, Biden said that he would "start the process where every vehicle in the United States military — every vehicle is going to be climate-friendly. Every vehicle. No, I mean it. We’re spending billions of dollars to do it."