"I think I was wrong then, about the path that inflation would take," Biden's Treasury Secretary Janet Yellen admitted to CNN. 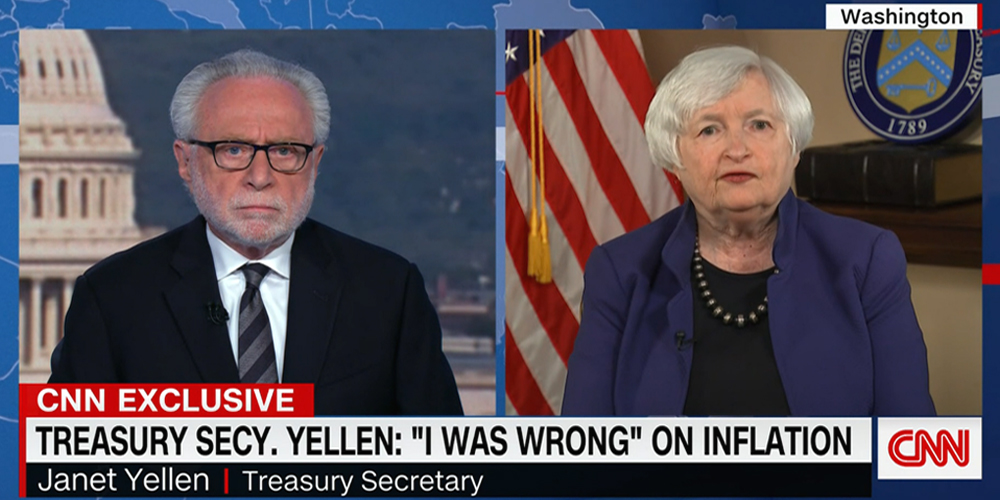 US Treasury Secretary Janet Yellen finally admitted this week that the Biden administration was wrong on their prior inflation forecasts.

During an interview Tuesday on CNN, Yellen admitted to Wolf Blitzer that her past statements downplaying the situation were incorrect, as inflation continues to soar in the US.

Yellen claimed in March 2021, "Is there a risk of inflation? I think there's a small risk and I think it's manageable." Fast forward to May of last year, the Treasury Secretary told the Wall Street Journal, "I don't anticipate that inflation is going to be a problem, but it is something that we're watching very carefully."

Blitzer played the statements back to Yellen before asking her: "Was it a mistake, Madam Secretary, to downplay this inflation risk? Did that contribute to the problems we're all seeing right now?"

Yellen replied, "Well, um, look, I think I was wrong then, about the path that inflation would take. As I've mentioned, there have been anticipated and large shocks to the economy that have boosted energy and food prices and supply bottlenecks that have affected our economy badly. That I didn't at the time, didn't fully understand."

She continued, "But we recognize that now, the Federal Reserve is taking the steps that it needs to take, it's up to them to decide what to do. And, for our part, President Biden is focused on supplementing what the Fed does, with actions we can take, to lower the cost that Americans face for important expenditures that they have in their budgets. Prescription drugs is one example, healthcare costs, another example. Utility bills, if Congress is willing to pass some of the proposals to boost the use of non-renewables, I think that can serve to bring down an important cost that households face. He (Biden) realizes, we all realize, what an important and huge burden inflation is placing on American households."

Blitzer responded, "We have all seen the gas prices explode over the past year, here in the United States, and which is a real real problem obviously, for so many. But let me just follow-up: you say you were wrong in your assessment of inflation a year or so ago. Just today the former US Treasury Secretary, Larry Summers, a man you know well, said the Federal Reserve needs to do some 'considerable soul searching right now about how badly they missed the gravity of the inflation problem.' Is Larry Summers right?"

Yellen replied, "Look I'm not going to comment on the Fed's policies, Chair Powell has made clear that he has every intention and believes (as I would) that the Fed has the tools to bring inflation down, and that's his focus. You know the Fed has a dual mandate: the economy is – I think it's fair to say – operating at full employment, with the strongest job market in generations. Inflation is too high, and it's got to be brought down."

"Is it going to get worse in the short-term?" asked the CNN host.

"Well, you know, core inflation has come down. It's still too high. But in recent reports, we've seen it move down and that's an encouraging sign. But oil prices are high,  Russia continues to wage war against Ukraine, we're trying and the Europeans are trying to address that and limit his ability to wage this war. There can be impacts on energy and food prices that we can do everything we can domestically to control. The President has authorized historical releases of oil from the strategic petroleum reserve."

A US Treasury spokesperson attempted to clarify Yellen's comments following the interview. The spokesperson told CNN, "The Secretary was pointing out that there have been shocks to the economy that have exacerbated inflationary pressures which couldn't have been foreseen 18 months ago, including Russia's decision to invade Ukraine, multiple successive variants of COVID, and lockdowns in China. As she also noted, there has been historic growth and record job creation and our goal is now to transition to steady and stable growth as inflation is brought down."

Fox News reporter Peter Doocy asked White House Press Secretary Karine Jean-Pierre on Wednesday during a briefing about Yellen's interview. "No easy questions today, huh?" Jean-Pierre replied then denied the administration was wrong and said that "there are things that happened ... that [were] not predicted at the time."

The position of the White House since the start of Russia's invasion of Ukraine has been to primarily blame Russian President Vladimir Putin for the detrimental impact on pricing.

In recent weeks, Senator Tim Scott (R- SC) had to push back against Yellen for her claim that abortion is good for the US economy. Yellen also previously suggested taxing unrealized capital gains and also said that the US should expect inflation to continue throughout 2022.