Black Lives Matter issued a statement condemning the US federal government, not Cuba's communist regime, over its "inhumane treatment" of the Cuban people, as demonstrations on the island continue. 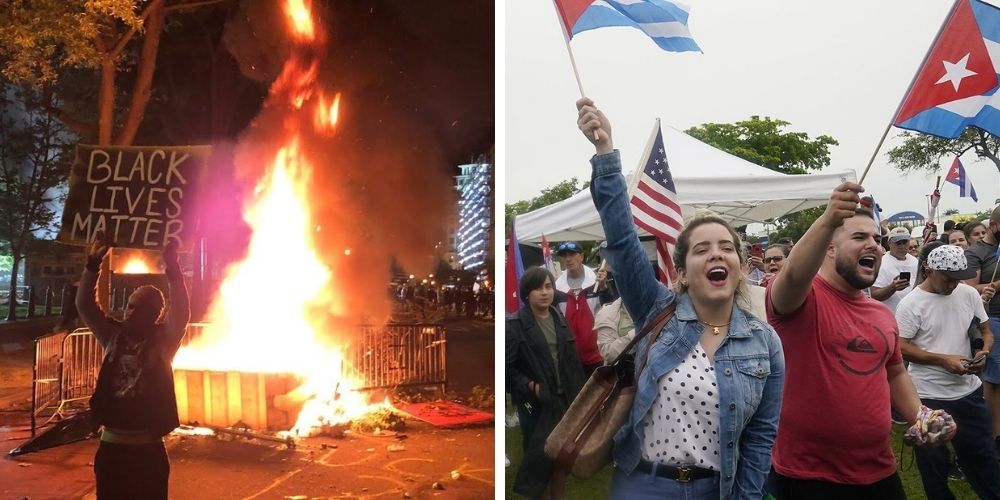 Black Lives Matter (BLM) issued a statement condemning the US federal government, not Cuba's communist regime, over its "inhumane treatment" of the Cuban people. Pro-freedom demonstrations have been ongoing on the island nation since Sunday.

BLM urged the Biden administration to lift the economic sanctions against the tiny island nation of 11 million residents, claiming that these trade concerns were causing unrest.

"Since 1962," they write, "the United States has forced pain and suffering on the people of Cuba by cutting off food, medicine and supplies, costing… [them] an estimated $130 billion."

"Without that money," BLM continued, "it is harder for Cuba to acquire medical equipment needed to develop its own COVID-19 vaccines and equipment for food production." However, medicine isn't part of the trade embargo.

This "cruel" and "inhumane" policy, BLM claims, destabilizes the country and "undermines" Cubans from electing their government. BLM says this is at the heart of the crisis in the country. They attributed America's commitment to sovereignty and self-determination to the crushing of the communist revolution.

"Instead of international amity, respect, and goodwill, the US government has only instigated the suffering for the country's 11 million people - of which 4 million are Black and Brown," BLM continued. "This embargo is a blatant human rights violation, and it must come to an end." The organization said Cuba has historically demonstrated solidarity with the "oppressed peoples of African descent."

BLM has been pro-communism and pro-Cuban government. Patrisse Cullors, one of the three founders, expressed her joy that her book should be compared to Mao's Little Red Book. She has noted that she is a "trained Marxist." For a few years now, and especially since the death of George Floyd, it has been considered unseemly by social media and mainstream media companies to critique BLM in any meaningful way.

BLM was founded in Marxist ideology. "The founders of the movement made no secret about their goals of using the movement to replace the American way of life with a Marxist society and yet the media and most politicians have chosen to ignore the origins of the movement, while some support it," Ari Hoffman wrote for The Post Millennial nearly a year ago.

When BLM was gaining the national spotlight, BLM Co-Founder Patrisse Cullors admitted that BLM is a Marxist Organization. "Myself and Alicia in particular are trained organizers," she said. "We are trained Marxists. We are super-versed on, sort of, ideological theories. And I think that what we really tried to do is build a movement that could be utilized by many, many black folk."

"Black Lives Matter originates from a need to intervene in a 500-year story and a plan to kill and create havoc and chaos in black peoples' lives," Cullors said.

Cullors "was the protégé of Eric Mann, former agitator of the Weather Underground domestic terror organization, and spent years absorbing the Marxist-Leninist ideology that shaped her worldview."

Cullors said "that she became a trained organizer with the Labor/Community Strategy Center, which she called her 'first political home' under the mentorship of Mann, its director. The Center describes its philosophy as 'an urban experiment,' using grassroots organization to 'focus on Black and Latino communities with deep historical ties to the long history of anti-colonial, anti-imperialist, pro-communist resistance to the US empire.'"

BLM's 3rd co- founder is Opal Tometi, who has met with Venezuelan communist Dictator Nicolas Maduro and is on video praising him.

"I am aware that justice also has to do with racial aspects," said Tometi. "What we are experiencing is the manifestation of anti-black racism and this is state violence. It must be called by its name. Police brutality, the murders of blacks, violence against the Afro-descendant community, all is proof of the violence of the State."

As Cubans fight for their freedom, despite the Biden administration's continued statements that lack of vaccine access is much of the reason Cubans have taken to their streets, the tide may be turning on BLM.

The reaction to BLM's statement was fierce, even from supporters of the movement. Author Carmen Pelaez, who has Cuban heritage, said she was disappointed in BLM's advocacy for the regime.