"And then Scott Gottlieb, who is a director of Pfizer on the executive committee of Pfizer, which is made 10s of billions of dollars from selling these vaccines, went to Twitter and said this guy is a problem and then they banned me." 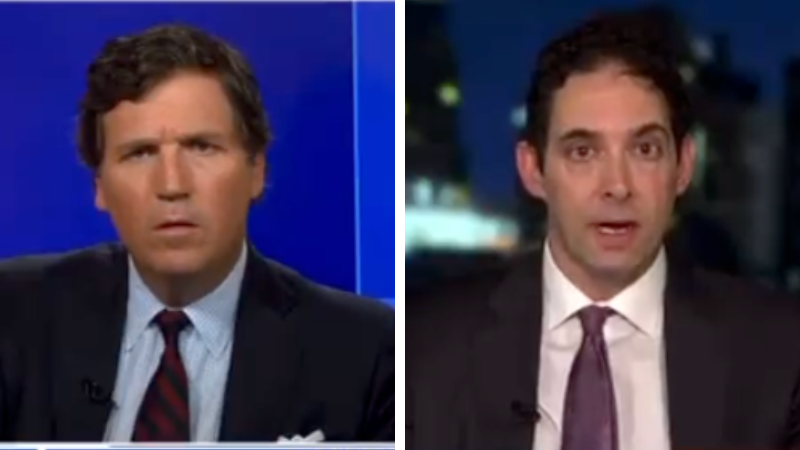 The Post Millennial
Oct 13, 2022 minute read
ADVERTISEMENT
ADVERTISEMENT
Alex Berenson revealed to Tucker Carlson on Thursday that he had discovered the name of the person who worked so hard to get him banned from Twitter over his concerns about the Covid mRNA vaccine. "Freedom of speech, does it exist anymore?" Carlson asked. "Not really. And there's a reason for that, because the federal government is trying to silence people who disagree with it, the Biden administration."

The man's name, according to Berenson, was Scott Gottlieb, "a director of Pfizer, on the executive committee of Pfizer, which is made 10s of billions of dollars from selling these vaccines," Berenson told Carlson, "went to Twitter and said 'this guy is a problem.' And then they banned me." Denmark has since banned these vaccines for minors.

"Here's one example, the Biden aministration silenced author Alex Berenson, former New York Times reporter, novelist, serious person, why did they do that? Because he asked unauthorized questions about the COVID shot," Carlson said.

"So Twitter, turns out acting on orders from the Biden administration, banned his account. Now, no one really knew that, people only suspected it. But now we know for certain because Berenson did something that Twitter was not expecting: he sued and he won," Carlson continued.

"And he found out the identity of the person who got him silenced and it turns out that person was not a White House staffer. Bigger than that."

Berenson revealed who it was who had gotten him banned from the platform, before he brought suit and a judge determined that Twitter was in violation of their own contractual obligtions.

"What we know is that there's a guy named Andy Slavitt, who was in the White House as a senior adviser to the Biden administration's COVID Response Team."

"And as early as April 2021, Slavitt was talking to Twitter about who I was, and that I was a problem for the White House and I was discouraging people from getting the vaccines which the White House wanted, and asking them why they hadn't banned me, so we know that.

"And we know that in July, as vaccine efficacy was fading, the administration very publicly and privately, got upset and wanted the social media platforms, including Twitter, including Facebook, to start banning people. And President Biden said on July 16, 2021 that Facebook and other platforms are 'killing people,' by allowing people like me, who were asking reasonable questions about the vaccines, on their platforms. Okay," he said.

"Then Twitter struck out at me," Berenson said. "In July they gave me three strikes, and I already had one previous strike, which I didn't even know about. So I was one strike away from being suspended at the end of July. And by the way, Andy Slavitt, who is no longer in the White House, but was still sort of at the center of this conspiracy and talking to Albert Bourla, who was the head of Pfizer, and talking to people inside the administration, on a practically daily basis, was very upset."

"He was continuing to push Twitter secretly to ban me," Berenson continued. "Still, when I came back on the platform last year in August, and was asking even harder questions about the vaccines, at a time when the Biden administration knew they were going to be pushing for mandates, knew they were gonna be pushing for boosters, they still wouldn't ban me. And then Scott Gottlieb, who is a director of Pfizer on the executive committee of Pfizer, which is made 10s of billions of dollars from selling these vaccines, went to Twitter and said this guy is a problem and then they banned me."

"So you criticize his product in which he had a financial interest. And he got you censored. Scott Gottlieb," Carlson said. Then he invited Gottlieb on the show.