"I can't believe you're a sick son of a b*tch who would come to a deal like this to make a political issue," one man is heard yelling at O'Rourke. 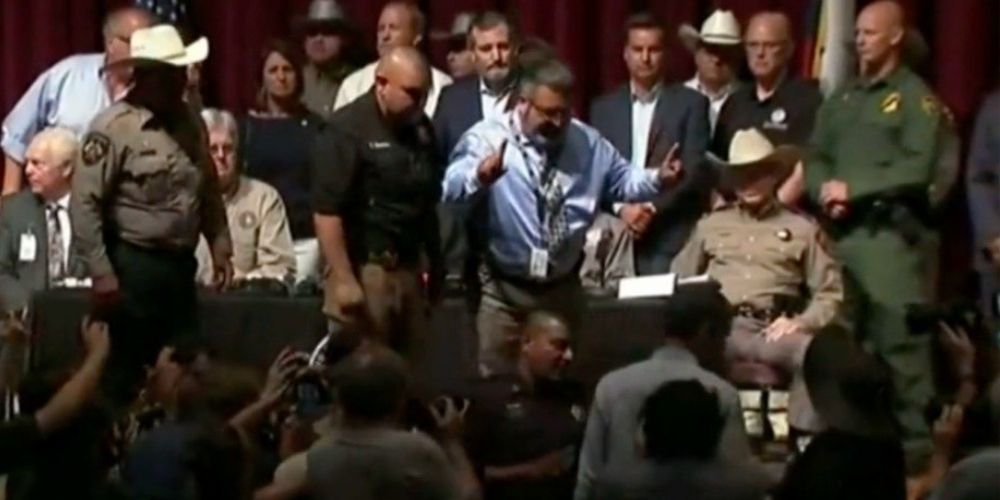 During a press conference on Wednesday following the school shooting in Uvalde, Tex., former US Representative and Texas gubernatorial candidate Beto O’Rourke confronted Governor Greg Abbott about when the next school shooting will occur, and what the state is doing to stop it.

The exchange came as Abbott was attempting to hand the microphone over to Lieutenant Governor Dan Patrick.

In the pause, O'Rourke approached the table, and began shouting.

Those on the stage began shouting, "Sir, you are out of line."

O'Rourke continued on to ask what the state is doing, saying that the situation was avoidable. He told the Abbott that the time to "stop the next shooting is right now, and you're doing nothing."

"I can't believe you're a sick son of a b*tch who would come to a deal like this to make a political issue," one man is heard yelling at O'Rourke, shortly before he was escorted away by police.

As he was escorted away from the stage, O'Rourke attempted to place blame for the shooting with those on the stage, including Abbott.

"It’s on a**holes like you, why don’t you get out of here," the man, who was standing behind the table of Texas officials, shouted back at O'Rourke.

Shortly after O'Rourke was taken out of the room, Abbott blasted the display, saying that people need to focus on helping the families affected heal rather than politics.

"We need to focus on the healing and hope that we can provide to those who have suffered unconscionable damage to their lives and loss of life. We need all Texans to in this one moment in time, put aside personal agendas, think of somebody other than ourselves. Think about the people who are hurt and help those who have been hurt," Abbott stressed.

In response to the display, many blasted O'Rourke on social media, saying that he was "out of line."

On Tuesday, 18-year-old Salvador Ramos entered Robb Elementary School in Uvalde, Tex., and fatally shot 19 children and 2 adults. Ramos was killed on the scene by a Border Patrol agent.