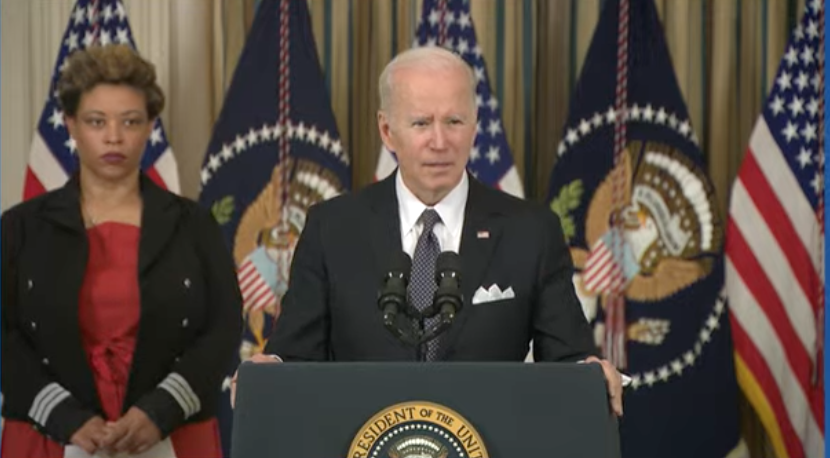 After speaking about his administration's proposed spending plan on Monday afternoon, President Joe Biden took questions from reporters about his remarks last week when he appeared to say Russian President Vladimir Putin should be removed from power, and that US troops would see conditions on the ground in Ukraine when they are there.

After Biden made the remarks about Putin, the White House walked back the comments, saying that Biden was not expressing a US intention toward regime change in Russia. Biden on Monday said he was "not walking anything back."

When multiple reporters asked what he meant about saying that Putin could not remain in power and the White House reversing what Biden said right after he said it, Biden said "I'm not walking anything back. The fact of the matter is I was expressing the moral outrage I felt."

"I want to make it clear I wasn't then, nor am I now, articulating a policy change. I was expressing moral outrage that I feel," Biden said, remarking that he makes "no apologies" for his personal feelings on the matter.

He was asked again if he was walking back the regime change comments, and he said again that it was a personal moral perspective that he was relating. Biden said that if Putin "continues on this course, he is going to become a pariah worldwide."

Biden said that he was "expressing his outrage at the behavior of this man" and that "people like this shouldn't be ruling countries."

Fox News' Peter Doocy tried again to get to the bottom of what Biden meant when he said that last week that Putin should not remain in power, that US troops would find themselves in Ukraine, and that if Russia used chemical weapons the US "would respond in kind."

"Are you worried that other leaders in the world are going to start to doubt that America 'is back' if some of these big things that you say on the world stage, keep getting walked back?"

Biden said "none of the three" were true, and said "you interpret the language that way." He said was was only "talking to the troops. We're talking about helping train the troops in the, Ukrainian troops that are in Poland. That's the context."

As regards the use of chemical weapons, Biden said "I'm not gonna tell you. Why would I tell you that? You've got to be silly." He said he would not publicly give that information as to a US response to a potential Russian chemical weapons attack.

When Biden had made the claim that the US would "respond in kind" to a chemical weapons attack by Russia, Pentagon spokesperson Jake Sullivan said that this would not happen.

Still, reporters questioned Biden on his statement that Putin could no longer remain in power, and that this statement had the appearance of a shift in US policy toward Russia, which would be a regime change.

Biden insisted that in speaking to reporters about US foreign policy, he was simply stating his personal feelings, and not indicating what US policy would be.

"It's ridiculous," Biden said. "Nobody believes we're gonna take down, I was talking about taking down Putin, nobody would believe that," Biden said to a room of people who all believed what Biden had said on Friday, and assumed he was speaking as the President and not an average citizen.

Biden said he was "expressing his outrage" at Putin, and stating that he should not be in power, not giving an indication of US foreign policy.

Reporters were concerned that Putin may have heard Biden's remarks and viewed them as a threat. Biden said Putin "is going to do what he thinks he should do period," and that he didn't expect Putin to react to his Friday comments.