American YouTuber Blaire White claims that she received recorded confirmation from Yaniv that the Canadian leaked her personal address and phone number. 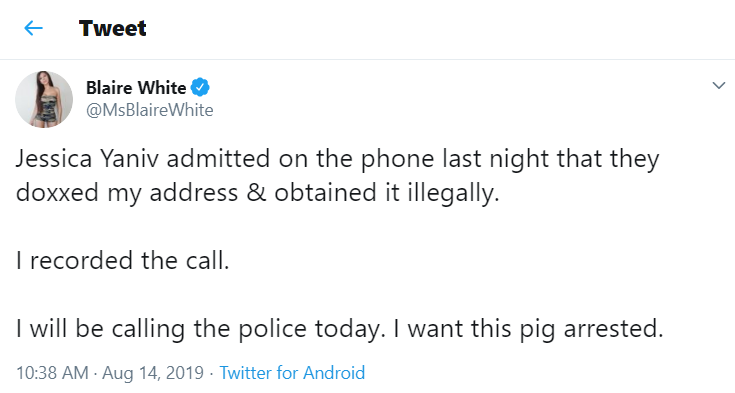 In a new twist to the Jessica Yaniv saga, American YouTuber Blaire White has claimed that she received recorded confirmation from Yaniv that the Canadian leaked her personal address and phone number.

White’s bombshell revelations come after yesterday’s now-deleted tweet alleging Yaniv had doxxed her, and launching a YouTube live stream discussing the evidence she believed confirmed that Yaniv was the culprit.

Among the evidence White shared in the live stream included speculation that the users posting her personal information had similar to identical usernames to suspected sockpuppet accounts belonging to Yaniv on Twitter.

Today, White tweeted “Jessica Yaniv admitted on the phone last night that they doxxed my address & obtained it illegally. I recorded the call. I will be calling the police today. I want this pig arrested.”

Yaniv has announced a sudden break from social media yesterday:

The Post Millennial reached out to both Yaniv and White for comment. Yaniv declined to provide anything on the nature of the allegations, instead insisting that this publication had been provided with “a cease and desist” and “if you contact me one more time, the cops will be called.”

White told us that “I will be notifying the authorities in Yaniv’s area of the admission of doxxing. The police don’t seem to care about the children at risk, but hopefully they care about a trans woman being doxxed.”