BREAKING: Chloe Cole reveals how her family was coerced by gender industry into accepting sex change treatments that were 'like Nazi-era experiments' when she was 12-years-old

"People often talk about how the children in these situations are vulnerable, but it’s the families as a whole that are vulnerable," Cole told Jay Richards at the Heritage Foundation. 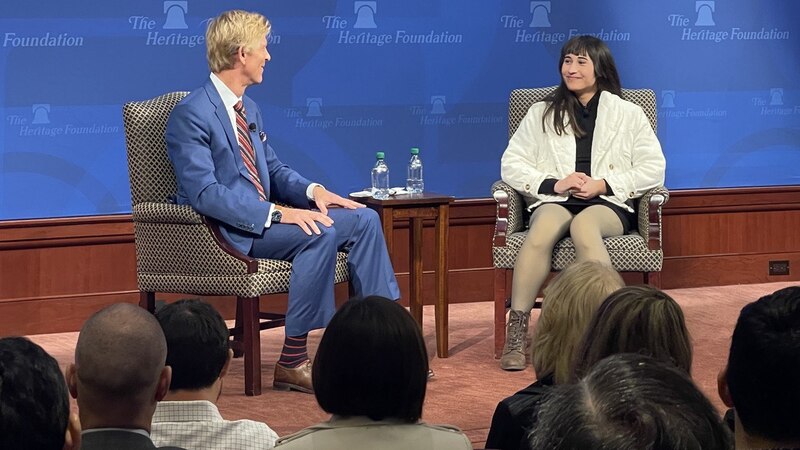 Chloe Cole is only 18 years old, and in her short life, she has undergone sex change treatments, come to regret them, and decided to speak out about that process and the harms done to children in the name of gender ideology.

Cole spoke to Jay Richards at the Heritage Foundation on Tuesday as part of the Gender Identity Summit, telling the public how she came to believe that she was not a girl, but meant to be a boy. The beauty standards she came into contact with did not match what she saw in herself, her broad shoulders.


"I started noticing that I didn’t really look like all the other girls," she said, going on to say. "I also started developing some body issues around this time."

"I started using social media. I got my first phone at 11 and the first platforms I used were primarily Instagram and Snapchat, which those are very image-based," Cole said. She felt that she was nothing like the curvy women who were sexually celebrated on the platform.

"The first therapist I had was pretty lousy, she didn’t do much," Cole said, noting that the therapists she had were all on board with the "affirmative approach."

There were only 3 to 4 months between the diagnosis and the referral to an endocrinologist to obtain puberty blockers. The first endocrinologist she saw refused to give a prescription because of the potential impact on her brain, so the family switched doctors to obtain the drugs.

About 6 months after the blockers, she started taking testosterone. She was only 13 years old.

"I started puberty pretty early, I was only about 9 years old," she said, noting that "this fueled my dysphoria."

The puberty blockers made her depressed, lethargic, and put her into early menopause. She was experiencing hot flashes. Once she took the testosterone, she "felt great. I finally had hormones back in my body," she said.

"I was healthy and confident," she said. The first change was that her voice dropped, she began to develop more muscle, and her body began to take on more masculine characteristics. Her eyebrows got thicker, her jawline became sharper. And she liked how she looked.

She was a social outcast in middle school, and had been prior to the gender transition. The transition made that a little bit worse, and the other kids picked on her some. "There was one particular boy who was really gross, he would make weird comments about me to other people. He would even spit on me in class."

Toward the end of 8th grade, he sexually assaulted her in a classroom and grabbed her chest. This made her want to "hide that part" of herself, and she didn’t want anyone to see that part of her for the rest of her life, she told Richards. She began to wear a chest binder after this, and wore it for 8-12 hours per day, even while swimming.

It was only a few years after that that she went under the knife, and her breasts were removed in her sophomore year. And she’s not the only one. "This happens all the time," she said.

It was in the online communications she was involved in that she first learned about the process, and saw the glorification of breast removal. She saw the women who had transitioned celebrating, worshiping the scars that resulted from the removal of their breasts.

By high school she was passing as a boy, she was able to make more friends, and felt more accepted. "There were even girls who had crushes on me," she said, "which became a problem because I was still attracted to males." Her dating pool was restricted.

"I was lonely," she said. Her development was behind her peers. She was diagnosed with depression, and didn’t know it had to do with her transition.

She was tired of wearing the breast binder, wanted to "swim shirtless," and started to pursue what is called in the gender industry "top surgery."

Cole’s parents struggled, she said. They wanted to help and support her, and doctors told her parents that Cole would be "at risk of suicide," and that regret rates are "1 to 2 percent."

"After my first appointment with a surgeon, I was referred to a top surgery classroom," she said, where she and her parents were told more about top surgery, which focused entirely on affirmation. They were shown images of successful surgeries, and were given no information about the potential for "botched surgeries."

"They were trying to market this thing," she said. The others in the class "were as young as 12," she said, and most of them had just started the process. At the time, she was surprised by how young the others in the group were.

Cole didn’t want to talk about "the detail of how they do it," which was a huge struggle for her, and still is. Medically, she is still experiencing complications and side effects, some of which "have just popped up last year," she said.

She was only 15 when they removed her breasts in service toward a permanent sex change.

They removed her breasts and reconstructed her chest to look more typically male. "It was like Nazi-era experiments," she said.

As she went under the knife, she believes that her surgeon had some doubts.

The surgery was outpatient, and she went home immediately afterward. It was several months after the surgery that she realized it had been a huge mistake, and that a horror had been done with her body.

At each step of the way, she was looking forward to the next step as the one that would make her whole, happy, and at peace with her body.

The regret was "a gradual process."

"The reality of the situation was like a slap in the face," she said, which truly began after the stitches came out and she had to change the dressings on the wounds, looking down at the incisions and scars.

Cole realized three years into the transition that she missed looking feminine, softer. She started wearing her "old girl clothes in secret."

"My feelings about this just got worse over time and I never really talked to anyone about it," she said.

She stopped going to school, and her parents pulled her out and put her in an online schooling program where she ended up taking a parent and childhood psychology class. She realized that she could never breastfeed.

"I realized that when I got my breasts taken away there was so much more that was taken away than just some organs, which I thought they were. I felt like a monster… learning about being a parent is all it took," she said.

Cole is on the autism spectrum, and girls that are on the spectrum are both harder to diagnose with that condition, and are vulnerable to gender ideology.

She gave up transitioning by May 2021, and she had no friends due to the pandemic. She was "pretty much interacting with people strictly online," and got "lots of vitriol and harassment" for speaking about her questioning and regrets.

Cole decided to speak out in April 2022 to tell her story.

"My parents get a lot of crap from both sides," she said, "from people on the right, and feminists, and that I should go out of my way to sue them, and it’s their fault that they got me into the situation. And it’s not true. People often talk about how the children in these situations are vulnerable, but it’s the families as a whole that are vulnerable."

"My parents were failed in a lot of ways," Cole said. Early on, teachers suggested that her parents get her evaluated for autism. The doctor they saw instead suggested that she had ADHD, and prescribed her drugs for that.

Cole took questions from the public, as well, and described the difficult process of coming off of testosterone. She came off the drug without guidance, and experienced urinary tract infections and blood clots in her urine. She said she just wanted to be done with it, and to stop lying to herself.

Those seeking to end their gender transition "are getting younger and younger," she said.

When asked about what was in her imagination about undergoing gender transition, she said it was "in the moment," and was not centered around what her life as an "adult male" would be like.

"It really captures the really vulnerable children," she said.

When asked what she would tell parents who are dealing with this, Cole said "I don’t like placing any blame on my parents," adding that "there were a lot of things they couldn’t really do anything about."

"It was kind of just assumed that I would follow the rules. They never really monitored what I was looking at," she said, and believes that maybe she had a phone and computer too young.

"I feel like if they just controlled that a little bit, or had me in sports from a young age," she said, that might have helped.

Cole is one of a handful of young women who have undergone this process only to realize that they are still women, that the sex change surgeries and drugs are a lie. The medical industry failed Cole, her family, and her future.