"Former trans kid" Chloe Cole was put on puberty blockers and testosterone at age 13, had a double mastectomy at 15, and then detransitioned at 16. She is now suing those who permitted these medical treatments to be done on a minor girl. 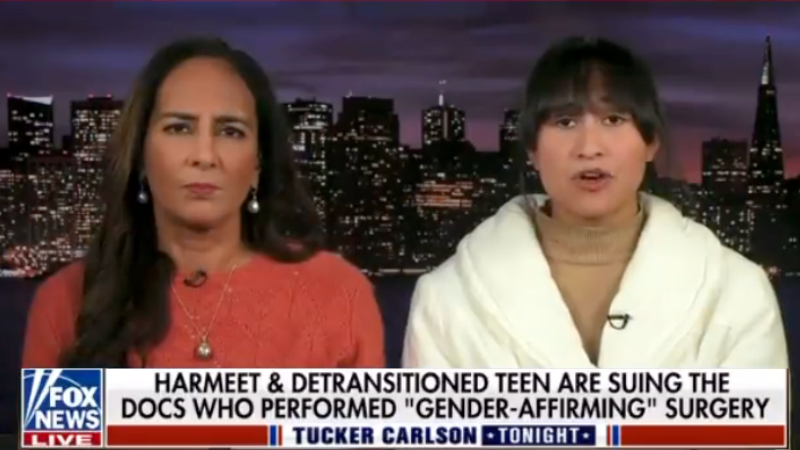 An 18-year-old woman who had a double mastectomy of her healthy breasts at the age of 15 in service to gender dysphoria is suing the doctors who emotionally and physically damaged her by allowing her to consent to medical transition when she was a vulnerable teenager. Chloe Cole is accusing them of being "liars and mutilators."

Cole, who describes herself as a "former trans kid," was put on puberty blockers and testosterone at age 13, had a double mastectomy at 15, and then detransitioned at 16. She is now suing those who "performed, supervised, and/or advised transgender hormone therapy and surgical intervention," in an attempt to ensure that no other young people are harmed by doctors the way she was.

"My teenage life has been the culmination of excruciating pain, regret, and most importantly injustice," said Cole. "I have been emotionally and physically damaged and stunted by so-called medical professionals in my most important developmental period. I was butchered by an institution that we trust more than anything else in our lives."

"What is worse is that I am not alone in my pain," continued the young woman who now faces a lifetime of regret because of the actions of "gender-affirming" doctors. "I will ensure that the blood and tears of detransitioners like me will not be in vain. It is impossible for me to recoup what I have lost, but I will fight to ensure that no other children will be harmed at the hands of these liars and mutilators."

Harmeet Dillon, CEO of the Center for American Liberty, is representing Cole. In an interview with Tucker Carlson, Dillon said she believes what doctors did to Cole is illegal, describing it as "medical malpractice and frankly mutilation."

"The medical system shouldn’t dictate the future of young children’s lives," Dillon said in a statement. "Through this legal action, we will hold the ‘professionals’ involved accountable for their deliberate choices to mutilate children and financially benefit from it without regard to the human tragedies they created."

Cole told Carlson that she was just 12 years old when doctors told her she could change sex, and that her parents trusted the doctors who were advising medical transition. She said from the moment she entered the gender clinic, there was nothing but affirmation. Neither she nor her parents were “informed of the option of psychiatric treatment or an approach that attempted to treat the underlying psychological conditions to bring about a mental state congruent with [her] biological sex.”

Cole also says her parents were "falsely informed" that she was a high suicide risk, and that they were even given the ultimatum: "would you rather have a dead daughter or a live son?"

Cole is not the first young person harmed by "gender-affirming" care to bring legal action against the doctors who failed her. In Australia, Jay Langadinos, now 31, is suing the psychiatrist who allowed her to begin medically transitioning at 19, Langadinos is "devastated" with the fact that she is sterilized as a result of getting her female anatomy removed.

In England, Ritchie Herron is suing the NHS for allowing him to medically transition while he was in extremely poor mental health. Herron had vaginoplasty and suffered severe complications which he now has to live with for the rest of his life.

In 2020, a judicial review against the Tavistock gender clinic in England was brought by a detransitioned young woman called Keira Bell, who claimed that the gender clinic didn’t adequately explore her reasons for suffering from gender dysphoria, but instead fast-tracked her to medical transition. The High Court ruled that under-16s did not have the mental capacity to consent to irreversible puberty blocker and cross-sex hormones and that it was unlikely that those under-18 could make an informed decision either.

The Tavistock has since been ordered to shut down after an independent review of the service found it to be not a safe or viable long-term option for the care of gender-confused children. The clinic now faces the possibility of a class action malpractice lawsuit.

The affirmation model of care was adopted by gender clinics in the mid-2010 despite there not being any good quality evidence to support its use. In gender-affirming clinics, doctors are forbidden from questioning a child’s self-declared transgender identity, and any attempt to help the child overcome their dysphoria and avert the need for major medical intervention is viewed as conversion therapy. Some nations, such as Canada, even have conversion therapy bans for gender identity written into law.

But countries around the world are starting to wake up to the harm of gender-affirming care. Sweden, Finland, and England have now done systematic reviews of the evidence for affirmation, puberty blockers, and cross-sex hormones for minors and have found there to be no evidence to support this approach. Both Sweden and Finland have halted pediatric medical transition outside of clinical trial settings and England is expected to do so soon.
ADVERTISEMENT
ADVERTISEMENT
chloe cole tucker