Bailey Jo Carter, described as a "queer therapist," posted the eight-second clip to the video sharing service where she makes light of a time when she "looked at a client's mom and said, 'Do you want a transgender kid or a dead kid?'" 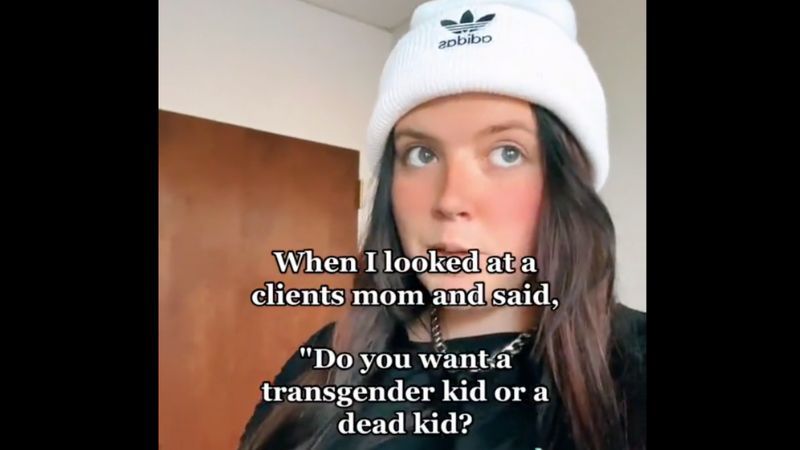 Alex Timothy
Jan 8, 2023 minute read
ADVERTISEMENT
ADVERTISEMENT
A therapist in Nashville posted a video to TikTok where she bragged about a time she emotionally blackmailed the mother of one of her clients, claiming the parent's choices were let their child transition genders or deal with their child's suicide.

Bailey Jo Carter, described as a "queer therapist" by her place of employment, the Nashville Collaborative Counselling Center , posted the eight-second clip to the Chinese-owned video sharing service where she makes light of a time when she "looked at a client's mom and said, 'Do you want a transgender kid or a dead kid?'"

The song "Speak Now" by Taylor Swift played in the background, featuring the lyrics, "all eyes on me, horrified looks from everyone in the room." Carter mouthed along to the second part of the line.

The TikTok video was shared to Twitter by conservative political commentator Matt Walsh, who described the therapist as "evil."

"Here's Nashville therapist Bailey Jo Carter bragging about using a suicide threat as emotional blackmail against a parent. These people are straight up evil. No other way to describe it," he tweeted.

Walsh, whose film "What is a Woman" featured the host traveling from place to place asking people of all walks of life the titular question, has been highly critical of gender ideology and medicalized gender transitions in children.

Libs of TikTok reposted the video and wrote, "They’re after your kids."

There has been an increase in the number of children treated for gender dysphoria in recent years, with prescriptions for puberty blockers, an experimental and harmful treatment used during gender transitions, having risen sharply in recent years.

There are a number of Medical malpractice lawsuits  in the US, England, and Australia related to young detransitioners suing the healthcare providers who allowed them to undergo irreversible medical treatments when they were young and in states of poor mental health.

In August, Leor Sapir, a Fellow at the Manhattan Institute, broke down the data about suicide rates in trans-identifying youth and debunked the activist narrative that preventing children from accessing drugs, hormones, and surgeries to "affirm" their transgender identities will cause them to commit suicide.

Sapir's research actually demonstrate that the hyperbolic rhetoric about suicide rates may actually do more to increase suicide than prevent it.

In June, a study by the Heritage Foundation showed that suicidality actually increased among youth who identify as transgender in states that allow minors to receive puberty blockers and hormone treatments.