BREAKING: Jack Posobiec gets STANDING OVATION at CPAC Mexico for urging US, Mexico to unite to crush cartels

Jack Posobiec addressed the crowd at CPAC's latest event in Mexico City, and made it clear that the US and Mexico need to do whatever it takes to crush the cartels that are running drugs and trafficking humans. 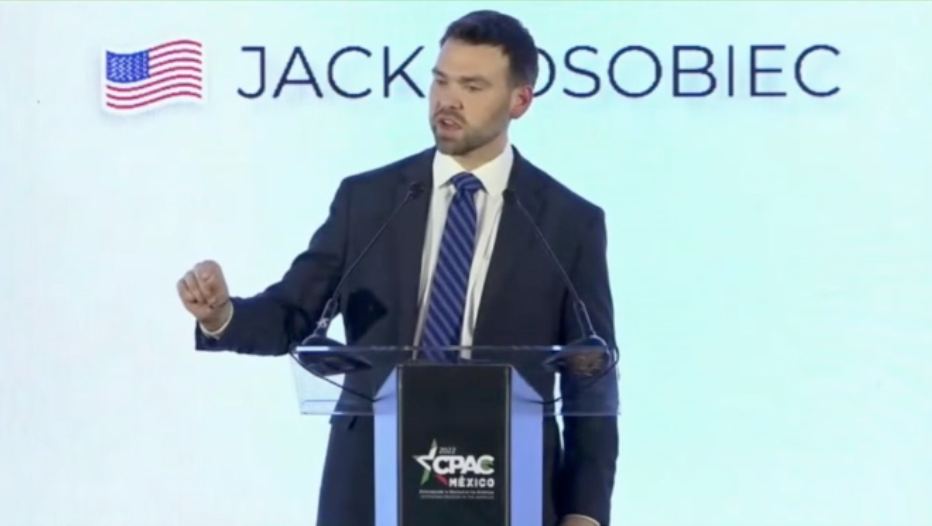 Jack Posobiec addressed the crowd at CPAC's latest event in Mexico City, and made it clear that the US and Mexico need to do whatever it takes to crush the cartels that are running drugs and trafficking humans across the US-Mexico border. In response, the crowd gave him a standing ovation.

"The American people and Mexican people must join together to take down the narcocartels, no matter what it takes," Posobiec said.

Human Events Daily's Posobiec spoke about the "corrupt politicians who take money from the cartels on both sides of the border," leaving American and Mexican citizens to fend for themselves in the face of the terror caused by their actions.

Human trafficking across the US-Mexico border is now a multi-billion-dollar international enterprise. Whereas the practice was once the work of so-called coyotes, it is now controlled by major crime syndicates. It is organized, well-funded, and those who end up victims of trafficking are at the mercy of Mexico's extremely violent cartels.

Posobiec ended with the prayer to St. Michael, saying "Saint Michael the Archangel, defend us in battle. Be our protection against the wickedness and snares of the devil. May God rebuke him we humbly pray; and do Thou, O Prince of the Heavenly Host, by the Power of God, cast into hell Satan and all the evil spirits, who prowl through the world seeking the ruin of souls. Amen."

In the documentary series Battle for the Border, Sheriff Mark Lamb, of Pinal County Arizona, spoke about the devatastating impacts of human trafficking, as well as how women and children are those most harmed by the practice. Women who cross the border on their own are often raped repeatedly during their journey. Some carry boxes of condoms, while others end up having their clothing held as trophies on what border agents have come to call a "rape tree."

This, Posobiec said, is a shared crisis to North America and Latin America. The impact isn't just felt on those who are trafficked, but in the US as well, where Democrats are further incentivizing human trafficking by declaring their intention to offer amnesty to all 11 million undocumented individuals currently living in the US.

Current leaders have stated their plans to address addiction through increasing federal funding to treatment initiatives, to support "at-risk youth," to increase investigations, and generally do whatever they can other than tightening the border between the two nations, including breaking down drug labs and hosting workshops on organized crime.

It is not just shared interests, Posobiec said, or a dysfunctional border, that unites the two nations, but a common foe. "Our shared enemy is the global tyranny of the transnational elites of the Party of Davos and their partnership with the Chinese Communist Party," he said.

Posobiec has been a frequent critic of those international bodies like the World Economic Forum, which seek to coordinate world leaders to consolidate power through the practice of authoritarian policies that deprive individuals of their privacy and autonomy. These include the creation of central digital currencies, which can be used to track, monitor and control global citizens, as well as overreaching controls on energy, all done in the name of the greater good.

This was the first CPAC event hosted in Mexico City since the event's founding in 1974, and on hand to kick it off were Posobiec, Steve Bannon, Tucker Carlson, and others to defend freedom and democracy in the neighboring countries.