Fauci claimed that Paul's attacks against him were politically motivated. 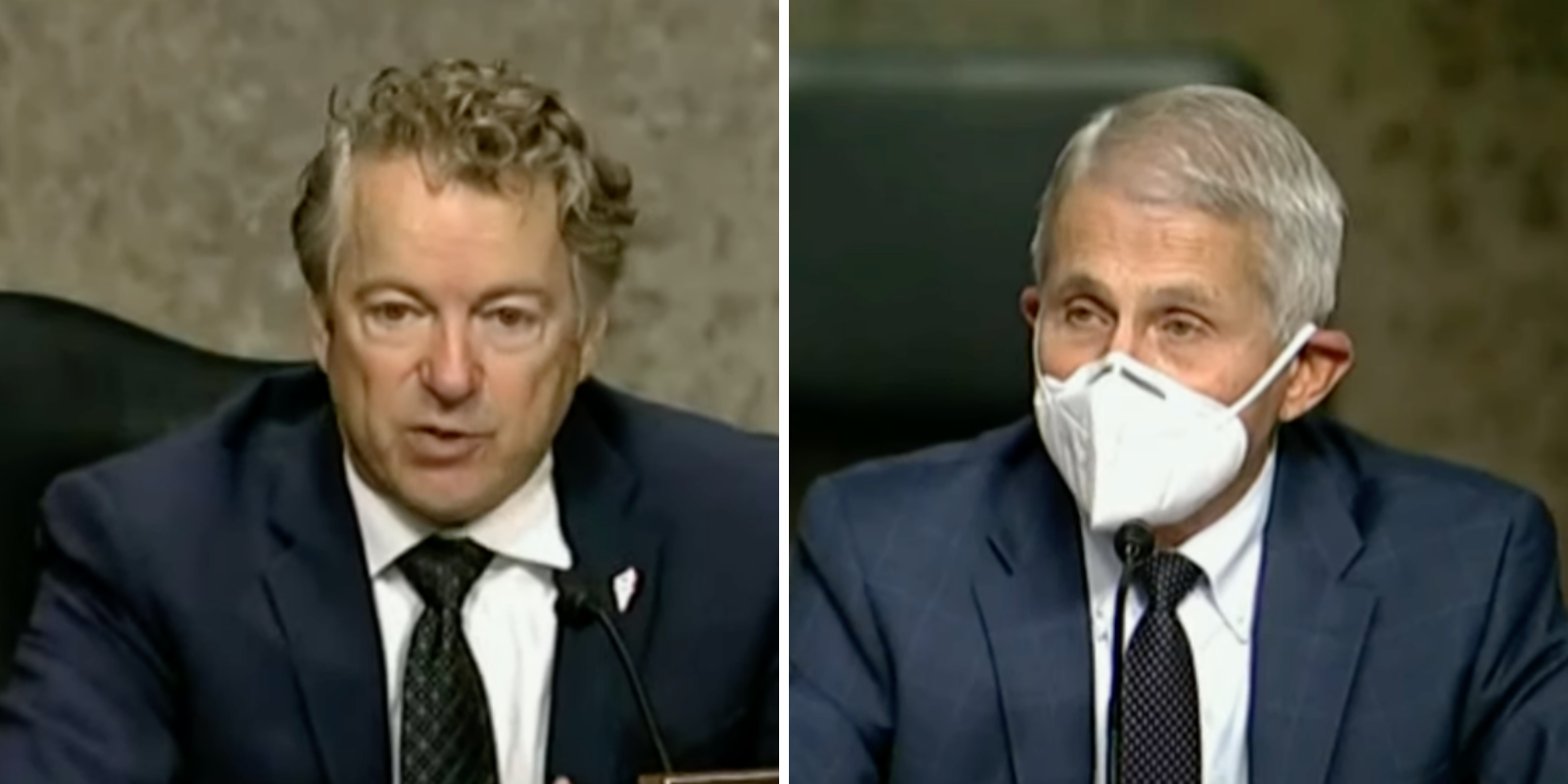 Senator Rand Paul had a new opportunity on Tuesday to grill Biden administration spokesperson Dr. Anthony Fauci on the government's response under President Joe Biden to COVID-19. Paul has grilled Fauci before the Senate on multiple occasions. Fauci claimed that Paul's attacks against him were politically motivated.

This after Project Veritas released documents from DARPA, the Defense Advance Research Projects Agency, that show a Commandant of the Marine Corps Fellow with DARPA saying outright that:

"SARS-CoV-2 is an American-created recombinant bat vaccine, or its precursor virus. It was created by an EcoHealth Alliance program at the Wuhan Institute of Virology (WIV), as suggested by the reporting surrounding the lab leak hypothesis. The details of this program have been concealed since the pandemic began. These details can be found in the EcoHealth Alliance proposal response to the DARPA PREEMPT program Broad Agency Announcement... dated March 2018... a document not yet publicly disclosed."

Paul entered an email exchange between Fauci and Dr. Francis Collins in which Collins and Fauci endeavored to "take down" noted epidemiologists as "fringe." Fauci, instead of addressing Paul's concerns, tells Paul that he is "distorting the truth" and misrepresenting Fauci.

"The idea that a government official, like yourself, would claim unilaterally to represent science, that any criticism of you would be considered a criticism of science itself, is quite dangerous," Paul began.

"Central planning, whether it be of the economy or of science is risky because of the fallibility of the planner. It would not be so catastrophic. If the planner were simply one physician in Peoria. Then the mistakes would only affect that physicians patients, the people who chose that physician," Paul continued.

"But when the planner is a government official," Paul went on, "like yourself who rules by mandate, the errors are compounded become much more harmful. A planner who believes he is 'the science' leads to an arrogance that justifies in his mind using government resources to smear and to destroy the reputations of other scientists who disagree with him."

"In an email exchange with Dr. [Francis] Collins you conspire and I quote here directly from the email to create a quick and devastating published takedown of three prominent epidemiologist from Harvard, Oxford and Stanford. (Apparently, there's a lot of fringe epidemiologist at Harvard, Oxford and Stanford.) And you quote in the email that they are from Dr. Collins and you you agree that they are fringe. Immediately as this takedown ethic," Paul critiqued.

"A published takedown, though," Paul continued, "you know, doesn't exactly conjure up the image of a dispassionate scientist. Instead of engaging them on the merits you and Dr. Collins sought to smear them is fringe and take them down. And not in journals, in lay press. This is not only antithetical to the scientific method; it's cheap politics and it's reprehensible, Dr. Fauci. Do you really think it's appropriate to use your $420,000 salary to attack scientists that disagree with you?"

Fauci attempted to defend himself by going after Paul, saying that Paul was mistaken, and that he has misunderstood the facts. "I think in usual fashion," Fauci said, "Senator, you are distorting everything about me."

Paul would not be deterred, and insisted that Fauci address the correspondence with Collins. "Did you ever object to Dr. Collins, his characterization of them as fringe?" Paul slammed Fauci for not writing back to Collins to say that the epidemiologists he wished to target were not fringe, and noted that Fauci then penned articles in lay publications about those Collins had implicated as going against the narrative.

"There you go again," Fauci said, refusing to engage, "you just do the same thing every hearing." Despite Paul's interruptions, Fauci continued: "You are absolutely incorrect as usual, Senator, you are incorrect almost everything you say..."

Paul continued with his line of questioning, alleging that essentially Fauci had colluded with colleagues to cover up the idea that the virus leaked from a lab, and that US funding played a role in the development of COVID-19 in a lab from which it was then leaked.

"You deny that the emails tell the truth of it. This wasn't the only time your desire to take down those who disagree with you didn't stop with Harvard, Oxford and Stanford. You conspire with Peter Daszak, who you communicated with privately, and other members of the scientific community that wrote opinion pieces for Nature... 17 signed a paper that called it conspiracy theory, the idea that the virus could have originated in the lab. Do you think words like conspiracy theory to be in a scientific paper?"

"Senator, I never used that word," Fauci said, when I was referring to it. You're distorting virtually everything—"

Paul interrupted again. "Did you communicate with the five scientists who wrote the opinion piece in Nature where they were describing 'oh this there's no way this could come from a lab'?"

"That was not me," Fauci said. Paul demanded to know if he had spoken privately with any of those scientists.

"You keep distorting the truth," Fauci said, before confirming that yes, he had spoken to those scientists privately. But he said that Paul was distorting the nature of that communication.

Paul wanted to know if any of those scientists brought up the idea that it could have come from a lab. Fauci claimed that Paul was making personal attacks, and while Paul said that virtually no one has had more impact over the nation's handling of the virus than Fauci, Fauci implored the committee Chairwoman to let him speak.

"Senator, first of all, if you look at everything that I said you accuse me of in a monolithic way, telling people what they need to do everything that I've said has been in support of the CDC guidelines," Fauci said.

The Committee Chair gave Fauci an opportunity to speak, and when he did, he used that opportunity to complain that the grilling he has received in Congress at Paul's hands, and the displeasure with his performance that has been communicated to the public through both Senator Paul and his colleagues, has led to death threats and harassment of himself and his family. He held up a print out of a web page reading "Fire Fauci." Paul has been the subject of many physical attacks, as well as targeted harassment.

Fauci claims that Paul is benefitting financially from his publicizing of his intent to oust Fauci, and that the attacks against him are politically motivated.