"He’s not going to say anything outright about what he’s going to do unless it will garner support from Independents and some of the moderate Republicans," said Bronson. 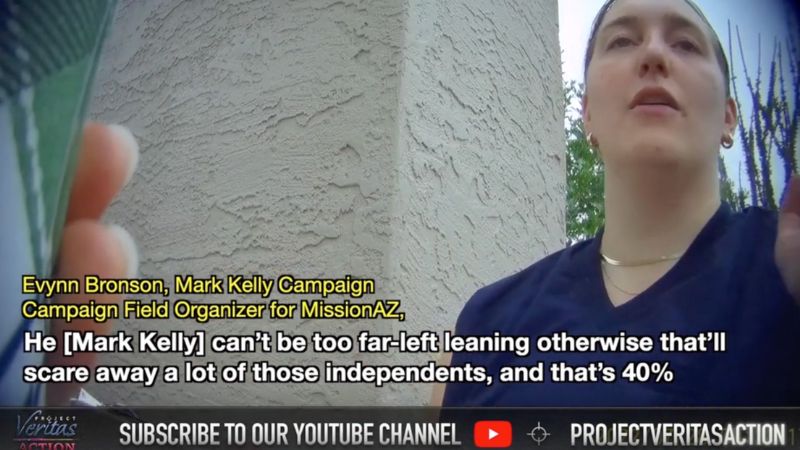 "What if I came across a Republican, and they, like, ask me if Mark Kelly is pro-life?" asked the undercover Project Veritas journalist.

"Yes," said Evynn Bronson, Campaign Field Organizer for Mission For Arizona. "I would say 'Mark Kelly is pro-life but also pro-keeping the government out of our healthcare.' I don’t know, something stupid like that."

"Even though he’s not pro-life?" the undercover journalist asked.

"Absolutely he is not pro-life," Bronson added. "And then I’d go to something like, 'you know after his wife was in a shooting, he values life so much.' It’s just a shame."

Bronson continued on to say that Kelly "can’t be too far-left leaning otherwise that’ll scare away a lot of those independents, and that’s 40 percent."

She added that Kelly "can’t win with just Democrat votes," and that "he has to play both sides."

"40 percent of the people voting are undecided whether or not they’re going to vote Republican or Democrat," Bronson noted.

Bronson later added that Kelly isn’t going to say all of the "very liberal" policies he has in store, with the undercover journalist adding, "even though you think he’s gonna do them anyways."

"He’s not going to say anything outright about what he’s going to do unless it will garner support from Independents and some of the moderate Republicans," said Bronson.

"Because he needs them?" The Project Veritas journalist asked.

The journalist continued by asking, "Oh, so if he’s outright said it then he wouldn’t win?"

"It would scare people away, yeah," Bronson said.

The journalist later asked Bronson what she would stay away from when getting Republicans to vote for Mark Kelly.

"I wouldn’t say—I wouldn’t say pro-choice, even though he is," Bronson said, who later said that Blake Masters, the Republican Senate candidate, "believes that the election was a fraud," calling it as "crazy, crazy, crazy far-right conspiracy as you can get."

"So it’s just like, look at the alternatives and they’re not super beautiful," Bronson said.

According to Mission For Arizona’s Twitter account, the group is pushing to "elect Democrats up and down the ballot," specifically listing their "mission to re-elect [Mark Kelly]." Their website lists the Arizona Democratic Party as their funder.