"Trust me, I want to burn down the entire system," said Wrynn. 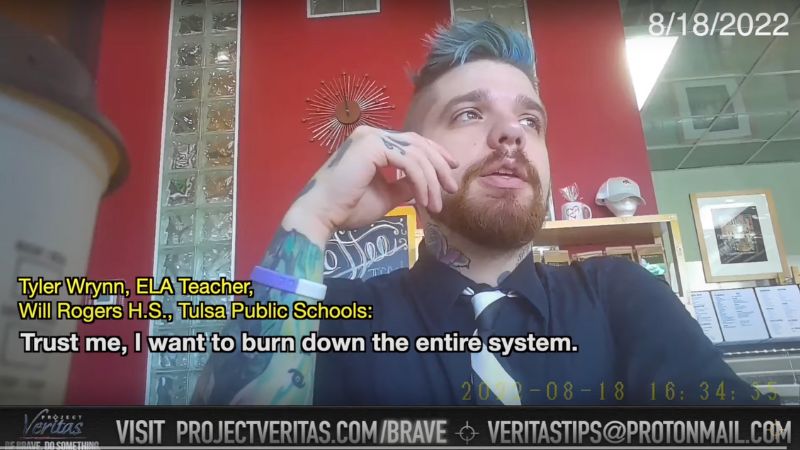 Hannah Nightingale Washington DC
Oct 3, 2022 minute read
ADVERTISEMENT
ADVERTISEMENT
The latest video in Project Veritas’ "Secret Curriculum" series highlights high school teacher Tyler Wrynn, who advocates for "anarchy" and had resigned from his previous position at another school after being exposed by Libs of TikTok.

Tyler Wrynn, who also went by Tyler Parks, teaches English at Will Rogers High School in Tulsa Oklahoma. An undercover Project Veritas journalist captured Wrynn stating that he wants to "burn down the entire system," but that a state bill is preventing him from doing so because he would be fired for being "too woke."

"So, I have a rather large TikTok following. I’m an authority figure. So, I [publish] a Christmas message of, 'Hey, if your parents don’t love and support you for who you are this Christmas, f**k them. I’m your parents now. I love you. Drink some water. I’m proud of you,’" Wrynn said.

It was this TikTok channel that caused him to resign last April, moving to a school that lies just 11 miles away from his old school.

"No, they definitely couldn’t. Owasso was like, they were super — they didn’t want to stand up to the parents, which I get. I mean, it’s Oklahoma, so what are you going to do," Wrynn said.

"But they definitely didn’t f*ck me over, like nothing went on my record. I could resign instead," he added. "So I didn’t like, tarnish my teaching experience with them."

Project Veritas founder James O’Keefe noted Wrynn’s social media, which was filled with posts praising the devil as well as anti-American rhetoric, but these posts were deleted from his accounts in preparation for his new teaching position.

O’Keefe noted a LinkTree link associated with Wrynn’s TikTok account, which lists off a number of books associated with gender ideology and critical race theory as recommendations for his students and followers.

"Now, Tyler’s recent TikToks attempt to portray him as just an alternative teacher dabbling with wearing neckties and mocking accusations that he indoctrinates his students," said O’Keefe.

The video continues on with Wrynn stating that his Gen-Z students are "like, super progressive."

"In Missouri last year — two years ago, I taught a, like a philosophy 101 class, and we took a political quiz. Half the kids were, like, radical progressives."

In another promotion of the video, Wrynn is heard stating, "I am definitely not part of Antifa."

"Despite his denials of being a Antifa sympathizer, Tyler sure talks like he supports the radical agenda," O’Keefe said. "The Antifa movement is defined by the Anti-Defamation League as being 'a decentralized, leaderless movement composed of loose collections of groups, networks, and individuals. Because there is no unifying body for Antifa, it is impossible to know how many adherents are currently active."

Wrynn also noted that "House Bill 1775" was standing in his way of being more radical with his students.

“The only thing that's a problem here [in Oklahoma] is that House Bill 1775 or something. I can get my license revoked for it, for being too woke…Trust me, I want to burn down the entire system.”

“Eventually, you want to remove Christianity — or religion [as a whole] — from progressive thought, because religion is inherently hierarchical.”

Speaking on the phone with O’Keefe, Wrynn denied speaking about religion in the classroom, reiterating that he can lose his teaching license over the topic.
ADVERTISEMENT
ADVERTISEMENT
Project Veritas Wrynn