As part of their series exposing liberal bias in academia, "The Secret Curriculum," Project Veritas took to the NYC Department of Education, where they uncovered English teacher Ariane Franco's shocking views. 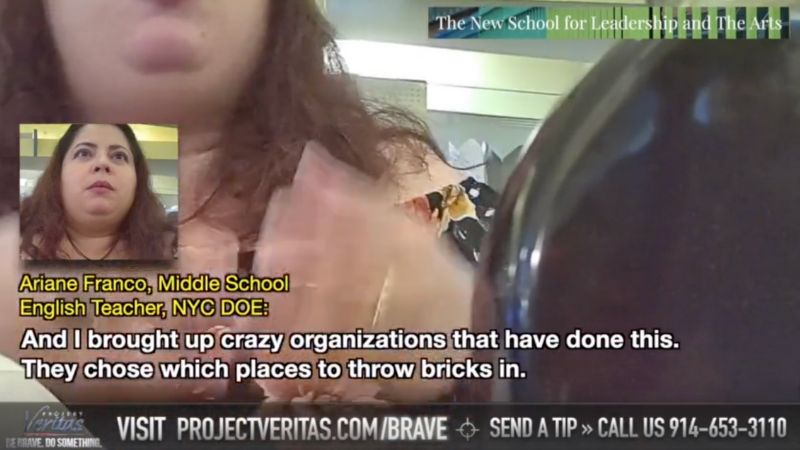 Olivia Rondeau
Sep 11, 2022 minute read
ADVERTISEMENT
ADVERTISEMENT
A new video from Project Veritas has exposed a New York City middle school teacher for encouraging her students to join in violent left-wing protests by throwing bricks at people who are on the other side of the political aisle.

As part of their series exposing liberal bias in academia, "The Secret Curriculum," Project Veritas took to the NYC Department of Education, where they uncovered English teacher Ariane Franco's shocking views.

"This is what I told my students," Franco said to an undercover investigative reporter. "I was like 'Guys, there's strategic ways to do this [protest].' You want to… I brought up [a] crazy organization that have done this. Like, they chose which places to throw bricks in."

"They chose – and they didn't do it in their own neighborhood… They didn't do it in black and brown communities. Doing it in our own community does not make sense," the teacher said of violent protests where people representing groups such as Black Lives Matter and Antifa have thrown bricks and other objects. During protests over the death of George Floyd in 2020, Detroit police arrested 84 protestors in one night after bricks and other objects were hurled at officers.

"You got to go after the people it's not directly affecting… throw [bricks] at people that are actually doing the things that [need to] change," Franco continued.

The teacher then launched into an anti-Pledge of Allegiance tirade to the reporter, claiming that she tells her students to not participate in it, but rather kneel or add her own words.

"I tell them – my kids – we don't stand up for the Pledge [of Allegiance]. We do the Pledge of Allegiance every morning, you know, but we keep going on our business," she said. "It was a class decision at the beginning of the year: 'They're not talking about me, so I'm not standing up,' you know?"

The teacher then told the reporter that "liberty and justice for all" just isn't enough for her classroom.

"At one point, when I first started challenging it, I had my kids change the words… It was something like – I think we added at the end 'And we will fight for those this does not address," or something like that. We added to [it] because it's like 'And liberty and justice for all, and we will fight until that is true."

According to Franco's own words exposed in the secret recording, she and her students "would kneel" during the pledge.

Project Veritas's "The Secret Curriculum" series has so far exposed several other teachers for leftist or liberal bias, multiple of which also hail from NYC.

On Tuesday, the group exposed an assistant principal in Neighborhood Charter Schools for using interview questions to weed out candidates who will not go along with his progressive agenda.

Earlier in the month, Project Veritas released a video containing an undercover conversation with a student director at the city's Trinity School, where a teacher unveiled how she and other teachers at the school inject leftist activism into their teaching.