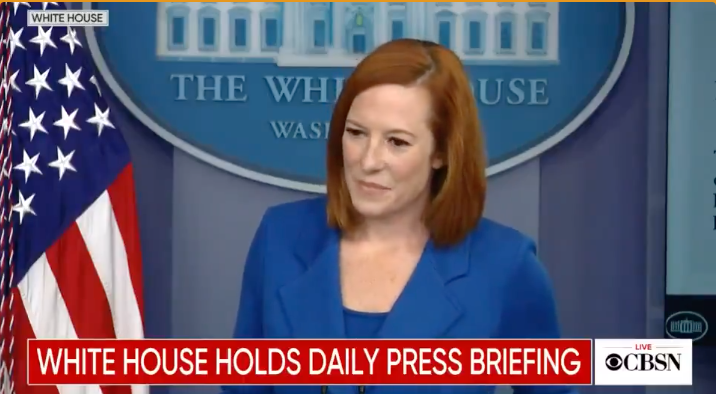 The White House was asked on Monday about the rising hospitalizations in Florida due to COVID, and their response was that Floridians should mask up, and that their elected leaders should encourage it.

"Is there any concern about the number of resources available? Rationing of care? Additional equipment that needs to be sent in, or personnel to assist?" Press Secretary Psaki was asked.

Psaki said that the White House stands "ready and available to provide any assistance that is needed, whether that's Florida or anywhere else in the country, we have these strike forces. We are at a very different point in the pandemic than we were months ago."

Taking aim at Florida directly, Psaki said that "I will note, as you touched on there, 20 percent of the cases we're seeing are in Florida. There are steps and precautions that can be taken, including encouraging people to get vaccinated, encouraging people to wear masks, including allowing schools to mandate masks and allowing kids to wear masks, which is not the current state of play in Florida."

Psaki has previously slammed Florida Governor Ron DeSantis, who has said outright that he would not allow schools to force kids to mask. Psaki had said that his actions here were "greatly concerning."

The White House then defended former President Barack Obama's massive 60th birthday bash at his Martha's Vineyard estate this afternoon, saying that "Obama has been a huge advocate of individuals getting vaccinated."

Fox News' Peter Doocy asked White House Press Secretary Jen Psaki if "President Obama is setting the wrong example about how serious COVID-19 is by hosting a big birthday party with hundreds of people this week?"

"Well," Psaki replied, "I would certainly refer you to the team who is working for my former boss to give you more specifics of what the protocols are in place. But I would note first that former President Obama has been a huge advocate of individuals getting vaccinated. What CDC has provided guidance on is for indoor settings in high, or substantial high zones of recorded cases."

"This event," she said, "according to all the public reporting, is outdoors and in a moderate zone." She noted that the Obama's have instituted "testing requirements and other steps they are taking," which she said she's "sure they can outline for you in more detail."

"But is there any concern," Doocy followed-up, "because just as you've said here, and you've had people saying over the past couple of days, vaccinated people can still spread this delta variant around. So is there concern that this President Obama birthday party might become a super-spreader event?"

"Well, I think Peter, the guidance is about what steps people can take when they are in public settings, indoor settings specifically was the new guidance, to keep themselves and others safe. In terms of what protocols they are taking, I would refer you to them and I'm sure they can give you more detail."

Psaki smiled before saying that the White House advises "everyone to follow public health guidelines," and that the "former President is a huge advocate of getting vaccinated, of following the guidance of public health experts, would certainly advocate for himself as well."

Obama will host nearly 500 people at his Martha's Vineyard mansion next weekend in celebration of his 60th birthday and in seeming defiance of CDC guidance.

With the United States seeing a rise in COVID-19 cases due to the delta variant, director of the National Institutes of Health Francis Collins said on CNN that people should avoid big parties.

"If there were 100 people, and, of course, how are you really going to be sure about people's vaccination status?" Said Collins.

Celebrities and luminaries are on the guest list, including Oprah Winfrey, George Clooney, and Steven Spielberg. It was reported that President Joe Biden, who served as Obama's Vice President during his eight years in office, would not be attending the soiree.