"Middle school students supporting a trans peer when a teacher misgenders them in the classroom. So many of these young people have demonstrated genuine and true resilience, and they have been an inspiration to me." 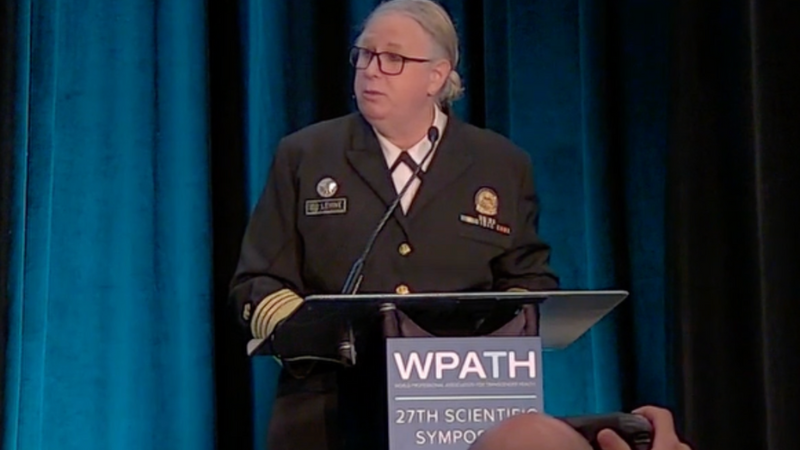 Mia Ashton Montreal QC
Sep 19, 2022 minute read
ADVERTISEMENT
ADVERTISEMENT
The 2022 WPATH International conference in Montreal got off to a bizarre start Saturday evening when radical left activists rushed the stage of the far-left gathering just as Dr. Marci Bowers was introducing keynote speaker Admiral Rachel Levine of the US Department of Health and Human Services.

"The experiences I've heard about college students volunteering for years without pay to train people on diversity, equity and inclusion," Levine said. "Middle school students supporting a trans peer when a teacher misgenders them in the classroom. So many of these young people have demonstrated genuine and true resilience, and they have been an inspiration to me."

Bowers, who introduced Levine, is the president of WPATH, and was one of the surgeons that operated on trans reality star Jazz Jennings, who was given puberty blockers at a young age before being put on cross-sex hormones, and ushered into penile inversion surgery. Bowers has stated that no child who has gone on puberty blockers and then onto cross-sex hormones prior to undergoing natural puberty has ever achieved sexual climax. Sexual arousal is something that Jennings has never experienced.

Levine is the Assistant Secretary in the Department of Health and Human Services, and was one of the Biden administration's diversity hires. Levine lived as a male, was a married husband, and fathered children before deciding to transition later in life and to advocate for children and teens to be permitted to undergo medical transition early in life, thereby depriving them of the opportunities for parenthood that Levine experienced. Levine was named "woman of the year" by USA Today.

Wearing COVID masks and an assortment of headgear, a group of young, impassioned "transfeminine" protesters chanted slogans such as "trans migrants matter too!" and "sex work is work!" They made demands for free access to all "trans-affirmative" care, the removal of "psychomedical" barriers to care, and curiously appeared to accuse WPATH of walking “hand in hand with the TERFs and transmisogynists of this world." They left the stage to rapturous applause from the assembled crowd, although organizers called the police, much to the disapproval of some in attendance.

Levine then took to the stage, and began by recounting experiences of meeting young people who believe themselves to be transgender in travels across the US, including the story of a group of middle school students who supported a "trans peer" when a teacher had misgendered them in the classroom. Levine proclaimed this as an example of "genuine and true resilience."

"It is wrong to politicize medical care," said Levine, without even a hint of irony. "It is critically important that medical decisions and the public pronouncements about them are based on science and human compassion rather than slander and stigmatization."

Levine then went on to politicize medicalized gender transition, and to advocate for states in the US to adopt policies that erase the designation of woman and girl to replace it with gender identity.

"Unfortunately," Levine said, "many states in the United states such as Texas, Florida, and others, are taking actions that do politicize the medical care of our transgender and gender diverse youth. Now, this process is not uniform. Governors in Indiana, North Dakota and Utah has spoken out against anti-trans bills passed by their state legislatures, citing compassion and a clear lack of public need about these laws."

Levine's Department of Health and Human Services insists that insurance companies in the US must cover medical gender transition for those who seek it. The basis for this, per the Biden administration, is that it is discriminatory to not provide medical gender transition. On his first day in office, Biden signed an executive order requiring all federal agencies to examine their policies and practices to advocate more for gender identity. He released a video telling American parents to "affirm" their kids, and has proposed altering Title IX guidelines so that women and girls sports is open to anyone who claims to be female, and not just those who are born that way.

Levine, and indeed the entire Biden administration, have themselves politicized the medical gender transition of minors, and it is an area of medical for which there is little solid evidence base.

"Numerous articles have demonstrated there's nothing about being transgender that predisposes youth towards negative mental health outcomes such as anxiety and depression, " Levine continued. "It is the bullying, the harassment, the discrimination that transgender youth face that leads to these outcomes."

Activists consistently argue that the on-average 4000 percent increase in youth identifying as transgender in the past decade is due to increased societal acceptance, not social contagion, but also that all the poor mental health outcomes are entirely due to the relentless bullying and harassment that these youth have to endure.

The studies that link lack of gender affirmation for trans-identified youth to suicide have been debunked. "Studies that claim 'trans' youth are at elevated risk of suicide are commonly compared with average mentally healthy teenagers, which is deeply misleading. When researchers compared 'trans' youth with teens suffering from similar mental health problems, there was virtually no difference in suicide rates between the groups. 'Trans' youth are not any more suicidal than teens with garden variety mental illness, which means that failing to 'affirm' a child’s transgender identity does not drive suicidal behavior," The Post Millennial previously reported.

Levine cited The Trevor Project, which parents have found push kids into transition, as having done a study showing that "many children and adolescents who identified as LGBTQI plus avoided athletic participation due to actual or fear discrimination, which is consistent with a report and 2021 from the center of American Progress reported fair play the importance of sports participation for transgender youth. The report we find finds only 42% of transgender youth participate in sports. And so these laws against participation target a small minority of the overall population and are clearly discriminatory and the question of youth quality of life extends far beyond participation in sports.

"As I mentioned, LGBTQI plus youth particularly transgender and gender, non binary youth, face bullying and harassment that drives them to self harm, depression and suicidality. The good news is is that it doesn't take much to save the life of a young person. A 2019 survey of more than 34 participants by the Trevor Project found that youth with one accepting adult one accepting about were 40% less likely to report a suicide attempt it takes one accepting adult doesn't have to be a family member to reduce the risk of LGBTQI plus particularly transgender youth suicide," Levine said.

Levine said that Covid was worse for LGTBQI+ youth, saying that a school "outed" a child to parents after finding that the student wrote about trans issues in their school work. For Levine, schools should keep gender identity secret from parents.

While the "trans murder epidemic" has been widely touted as a problem, it is actually not real. "Only five transgender people have been murdered in confirmed hate crimes since 2015. Four of their murderers are convicted and facing decades in prison. The most recent confessed his crime and is awaiting trial," reported The Post Millennial.

"Of all murders reported since 2015," Chad Felix Greene wrote, "0.001 percent of transgender Americans experience lethal violence, of any kind, with only five confirmed cases of hate-motivated deaths. This is remarkable in a county of 331 million people. While each murder is tragic and the families deserve compassion, the data shows us that transgender Americans, as all LGBT Americans, are incredibly safe and protected in this country."

The speech ended with Levine issuing a call to action.

"This is simultaneous with a growing reactionary backlash against school policies affirming and supporting LGBTQ students, which has resulted in legislation lawsuits and pressure to implement anti LGBTQ policies in schools. And you can see this very clearly in Florida with their quote unquote don't say gay, so I have a call to action. This is a call to action from all of you. I firmly believe that as a society, we have not made progress. Unless we have made progress for all we must support," Levine said.

"Our mission as doctors and other medical professionals, psychological professionals, and really the diversity that we have in this room of professionals must include a proactive a proactive approach rather than merely a passive rejection of intolerance," Levine said. "We have the ability to share information to speak with the authority that our training and our experiences have given us, and to work together to assert our right to practice medicine as we were taught.

"These conversations should not just be restricted to medical settings," Levine said. "Please offer yourselves as information or resources, not just for youth, but for school teachers, principals, professional organizations, recreation centers, many would benefit from having this information, even if they themselves are not involved in these decisions. So please proactively seek out opportunities to speak about what you know.

"Our task quite simply is to educate the public in the United States and throughout the world, in as many forms as possible. We have to have conversations that question the assumptions that people make that underlie these attacks on trans and non binary people. Educating people sometimes meaning asking them questions in addition to just giving them answers, we must push back the veil of ignorance. And this demands extra efforts and as a challenge for WPATH and for all of us," Levine said.

Following the speech, several members of the audience took turns to ask questions. Each introduced themselves and announced their pronouns, many identifying themselves as huge fans of Levine, one going so far as to say Levine was very "Rabbi-like."