BREAKING: Trump tells young patriots 'we have to reclaim America' in epic speech

"We are a nation in decline. We are a failing nation." 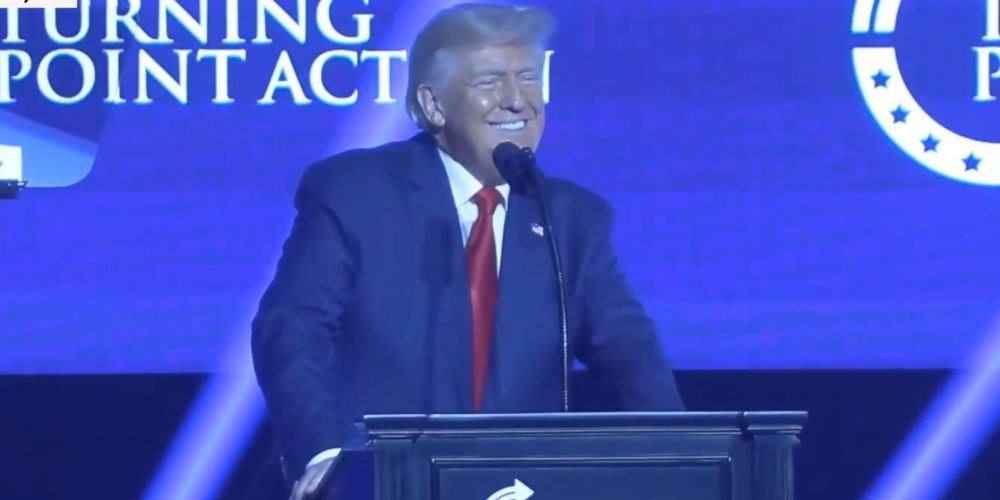 On Saturday, former President Donald Trump appeared at Turning Point USA’s Student Action Summit on behalf of Turning Point Action in Tampa Florida, and spoke on the decline of the United States under the Biden administration and through actions by the radical left.

In his nearly two hour speech issued to a packed Tampa convention hall, Trump blasted Biden and his team for open border policies, rising crime and drug usage, for last summer’s chaotic and deadly withdrawal from Afghanistan, amongst many other issues.

"We’re going to take back very soon our country. This difference between our movement and the forces we’re fighting against could not be more stark," said Trump. "They believe in censorship, cancel culture, intolerance, and rigid conformity. We believe in free thought, free assembly, free expression, and a thing called free speech."

Trump said that the "radical left" wants to have open borders, defunding the police, and to block voter ID laws.

"They live by the philosophy of always putting America last."

Trump noted the sharp contrast in the state of the US from two years ago under the last months of the Trump administration, saying the country went from "the strongest it has ever been," to "perhaps the weakest, especially when you include recognition and respect from all around the world."

"We’re not respected any longer by anybody," said Trump.

The former president continued on to blast the current state of energy independence in the US, saying, "Two years ago, we were energy independent and even were energy dominant. We were going to be bigger than Saudi Arabia and Russia combined times two. Now we are a beggar nation."

"We are a beggar nation, with Biden down on his knees pleading for energy from all over the globe, going o Venezuela and Saudi Arabia, going to countries all over the globe asking for help and we have more liquid gold under our feet than all of these other countries that you hear about and that they talk about all the time," said Trump.

Trump noted that people from all walks of like were doing better "historically than they ever did before" in the pre-Covid economy.

"So sad what happened to the world because of the virus that came in. But we did a great job and when we gave it back, not very happily either I will tell you, when that happened, you take a look at the numbers. The stock market was higher than it was pre-Covid. It was higher, it was stronger. People were doing very well. And then it's just been systematic destruction."

"And remember, there was a bounce and the bounce lasted, but that bounce was from what we had done previously with the tax cuts, the regulation cuts. And then you look at what's happened right now and it's very, very sad to watch," he said.

"But pre-Covid our employment numbers everything -- and we did it with no inflation. We had no inflation. Under Biden, we have the highest inflation in 41 years, 9.1 percent. It's much higher than that, in my opinion. Costing families $6,000 per year, bigger than any tax increase ever proposed, other than the tax increase they are now proposing."

Trump noted the border wall that was started under his administration at the southern border, which he said "could have been done in three weeks" if it weren’t for lawsuits brought forth against the administration for the project.

"The border was the best and the safest in US recorded history by far," said Trump in regards to his time in office. "And also, it was the best on drugs and best on human trafficking that we’ve seen in 44 years."

"And now they have turned it into the worst border in history, and maybe the worst for any country… Millions and millions of people are during into our country from jails. They’re releasing their prison population into the United States of America. We’re like a dumping ground and you’re paying the price and you will in the future."

"We believe America should be a sanctuary for law abiding citizens who love our country not for criminal Americans.

Trump continued on to talk about the strength of the military under his administration, including the creation of Space Force and the defeat of ISIS int he Middle East.

"They surrendered our strength, and what they've done in Afghanistan. Most embarrassing, horrible moment in United States history. I believe that too. I think it was the most humiliating time in history. And we were leaving. We were getting our 21 years. I had it down to 2000 but we were going to keep Bagram."

Trump later added, "we went 18 months without one American soldier being killed in Afghanistan, very different from our Democrat run cities where many, many people are killed in a week in cities that are run by Democrats and badly run by Democrats."

"But we have a little thing I think we should tell you because it's also depressing when you look at what's going on. We rebuilt our military. Our military is great. We have great leaders, you hear all about the woke stuff. And I think a lot of our military laugh it off. But you know, at some point it really gets in there and you become infected and it's bad," said Trump.

Trump blasted the disastrous withdrawal from Afghanistan last summer, noting that billions of dollars worth of military equipment had been left behind in the country, calling it the "greatest humiliation" for the US.

Trump continued on to tell the crowd of young attendees that "we have to reclaim America," and that "If we are going to save our country we have to get to work immediately."

"We have to stop the radical Democrat socialist spending spree and stop runaway inflation. It's going to eat everybody alive. We haven't seen anything yet. We have to abolish all Covid mandates and lock downs, rehire every patriot who was shamefully fired from the military with an apology. We have to give them an apology and all of their back pay," said, also noting that the "invasion" at the southern border must be stopped.

"America stands at a pivotal hour," said Trump. "And the choices we make will determine whether we fail or whether we flourish and you're going to be right there on the front line. Right Now, these next few years our country is going to decide if we're going to allow a corrupted and radical ruling class to snuff out this incredible torch of liberty, or whether we resist the forces of decline and raise that torch higher and prouder than ever before to enlighten and inspire the entire world. Together, we're standing up against some of the most menacing forces, entrenched interests and vicious opponents are people have ever seen. We've never seen anything like it."

Trump said that under the Biden administration, "We are a nation in decline. We are a failing nation."

In the face of this decline though, Trump sought to instill hope in the audience.

"And just like with all the other crossroads of our history, I have no doubt that it will be young, courageous freedom loving patriots of America like you who will once again lead the way to greatness."