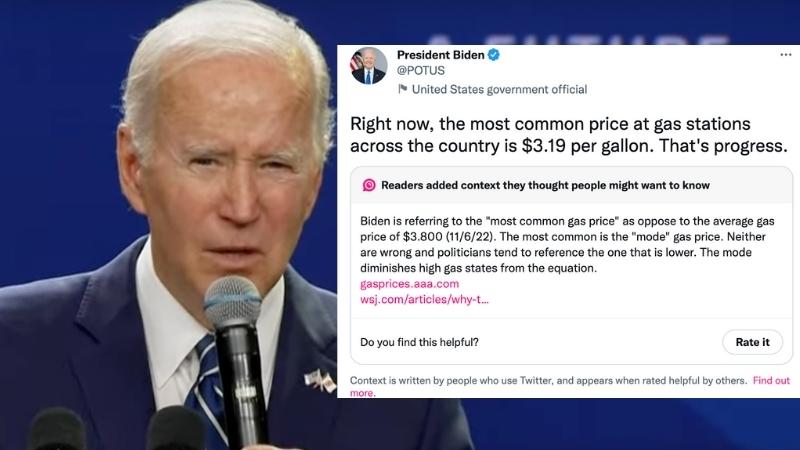 In a Sunday morning tweet, the 79-year-old president said "Right now, the most common price at gas stations across the country is $3.19 per gallon. That's progress."

Birdwatch, "a community-based approach to misinformation" that was launched in January 2021, flagged Biden's post with added context.

"Biden is referring to the 'most common gas price' as opposed to the average gas price of $3.800 (11/6/22). The most common is the 'mode' gas price. Neither are wrong and politicians tend to reference the one that is lower. The mode diminishes high gas states from the equation," said the note.

"This is like bragging about lower radiation levels in Hiroshima in 1946," wrote the Libertarian Party of New Hampshire.

Links to the American Automobile Association website and a Wall Street Journal article explaining the difference between the mode and average gas prices were also linked as sources by the community fact-checker.

The "most common" price that Biden toted is still significantly higher than the average gas price at the tail end of the Trump administration, which was about $2.30 per gallon, according to the gas price tracking program GasBuddy.

Despite the Biden administration’s celebrations over the drop in gas prices, they also fail to acknowledge that average gas prices are up from last year, which was $3.20.

The fact-check comes just days after Biden accused new Twitter owner Elon Musk of "spew[ing] lies all across the world" at a Democratic fundraising event in Illinois.