To this day, relatively little is known about “Indian” Jack Jacobs – a first-class inductee into the CFL Hall of Fame. 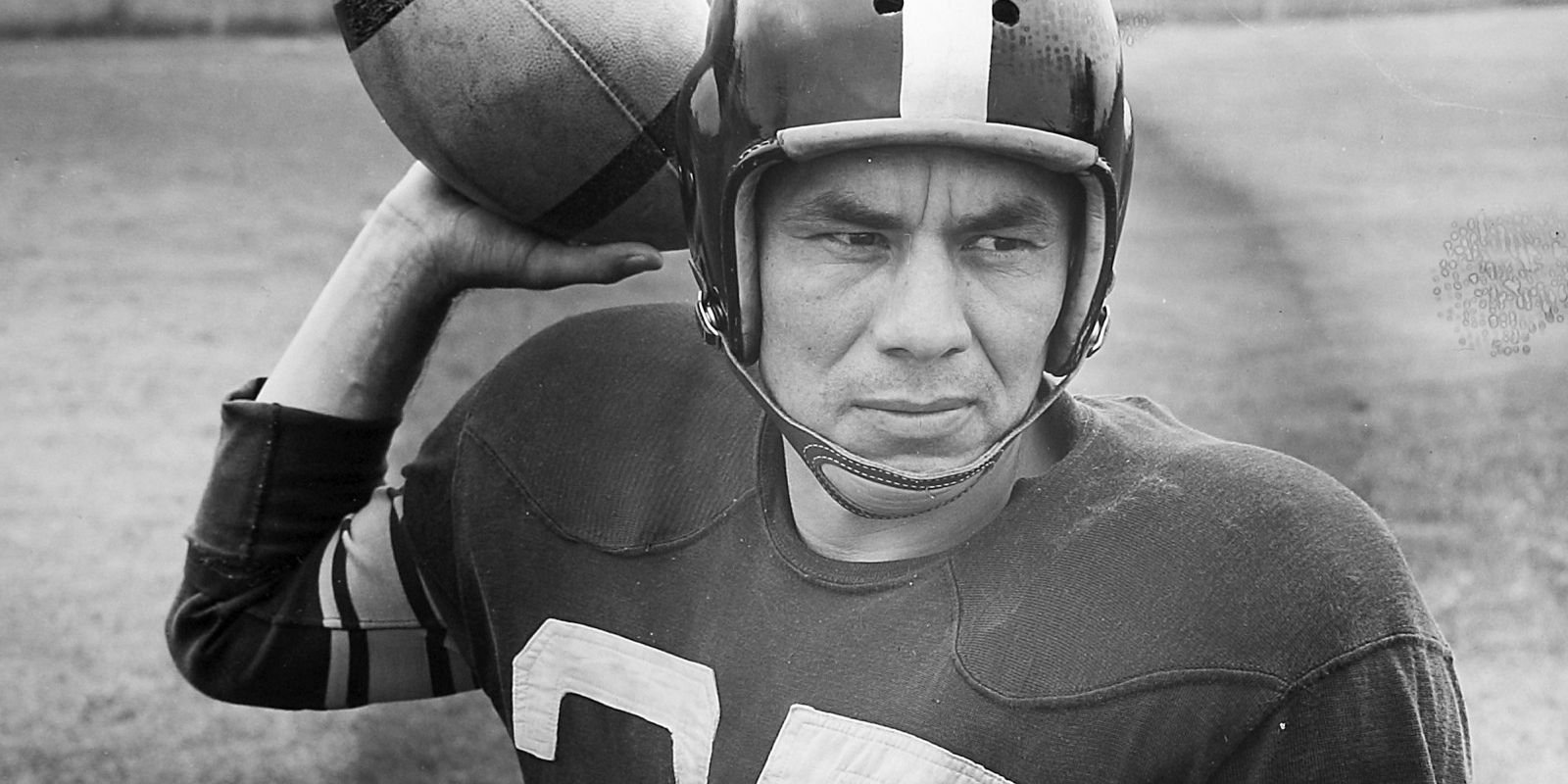 For the record, “Indian” Jack Jacobs was not your typical ‘Indian boy’ from Muskogee.

Born in Holdenville, Okla. Jack Jacobs grew up to hostile messages on storefront signs, which read, “No dogs or Indians allowed.”

At the time, he did not speak a word of English and was raised in a world that saw him as less than human.

When he was born in 1919, racism was commonplace. And in 1935, much remained the same, as his journey in football began.

But like fellow Oklahoman, Jim Thorpe, he overcame insurmountable odds to shatter glass ceilings in sports. But, it came at a grave cost.

Following his recruitment to and subsequent state title for Central High School in Muskogee in 1935, the sudden passing of his mother was devastating. The tragedy was exacerbated more so by his cultural degradation.

“When he left, he began speaking English all the time,” says his daughter Linda, “but forgot the Cree he knew.”

“When his mother was dying, he no longer could talk to her.”

In 1937, Jacobs was named the most outstanding high school player on Oklahoma’s All-State football team.

According to the historian, Ray Soldan, “This 185-pound Indian boy stood out like a piece of radium in a deep, dark tunnel.”

J. Brent Clark, author of Sooner Century: 100 Glorious Years of Oklahoma Football, says, “When Jack Jacobs walked onto the Oklahoma campus in 1938, he was considered to be the greatest athlete Oklahoma had ever recruited.”

Before he transformed pro-football in both Canada and America, his mentees in Knute Rockne and Tom Stidham were vital in the aftermath of his mother’s passing. Their shared lineage as Cree-Americans from Central High School and Oklahoma University, respectively, facilitated his transition to pro-football.

To this day, relatively little is known about “Indian” Jack Jacobs – a first-class inductee into the CFL Hall of Fame.

However, an admirer of Jacob remembers him viscerally, having hitchhiked more than 170 miles to watch him play.

Throughout the game, he was awestruck.

“I just remember watching Jack Jacobs kick,” he later said. “The way he held the ball, the measured steps, the swing of his leg. I was glued to him. And he kicked the living hell out of the ball.”

At Jacobs’ funeral in 1974, at the age of 54, after his fourth heart attack, Royal told Jacobs’ sister, Anna, “Your brother was the greatest football player I ever saw.”

The former Sooner quarterback and kicker reside in the Oklahoma Football Hall of Fame, holding passing and punting records at the University of Oklahoma set nearly 80 years ago.

After graduating from OU, Jacobs served time with the U.S. Army Air Forces as part of the war effort, where he was stationed in Santa Ana, Calif., alongside Yankee slugger Joe DiMaggio. Both phenoms used their considerable athleticism to boost the morale of American troops, going 20-0 as part of the Seventh Army Air Forces baseball team.

Upon returning after the war, Jacobs was traded by the Cleveland Rams to the Washington Redskins and then again to the Green Bay Packers.

In the season opener against the NFL champion Chicago Bears, Jacobs amassed one of the greatest games ever by a Green Bay Packer, throwing for two touchdowns, running for one, and intercepting three passes in a shocking 29-20 upset.

“Simply put, ‘Indian’ Jack Jacobs was one of the most gifted athletes in Packer history,” wrote the late Packer historian Lee Remmel.

After two more losing seasons in Green Bay, Jacobs took his talents up north to the Winnipeg Blue Bombers, who offered him more money and a chance to throw the football. At age 30, it was a new beginning for Jack.

When the new Winnipeg Stadium opened in 1953, the press quickly dubbed it, “The House That Jack Built.” Jacobs had become beloved by fans and teammates alike, with attendance skyrocketing upon his arrival to the CFL.

“Jack was an institution in Winnipeg,” says Nick Miller, who played for the Blue Bombers in ’53. “With a 50-inch chest and a 32-inch waist, he wore clothes like a model, and he strode the field like a king. We referred to him affectionately, and with respect, as ‘Indian’ Jack. He was the ultimate professional. Jack not only raised the level of football in Winnipeg but the entire CFL. He was a god in Winnipeg. On a 90-degree day in July, 2,000 fans would come out to watch him practice.”

Bud Grant, a three-sport athlete, viewed his quarterback with the highest regard, stating, “Jack was vocal. He was a fiery leader and a great, great defensive back.”

“As competitors go, he was at the top of the list. He didn’t give any quarter.”

While the deadline to apply is fast-approaching (October 18th), these bursaries provide Indigenous students with the opportunity to pursue a passion for sports at post-secondary. All that’s required of applicants is a profound love for football and exemplary leadership qualities.

Wade Miller, President & CEO of the Winnipeg Blue Bombers, states, “We are thrilled to once again offer this great opportunity to deserving student-athletes for the third year and would like to thank Eagle Vision for their support with this scholarship.”

“Eagle Vision is once again excited to support the Jack Jacobs scholarship, and we are proud of the previous recipients,” according to Partner Lisa Meeches.

The scholarship recipients will be presented their bursaries on October 25th, during the Blue Bombers final regular-season game.

For more information or an application, please head to www.bluebombers.com/jack-jacobs.scholarship